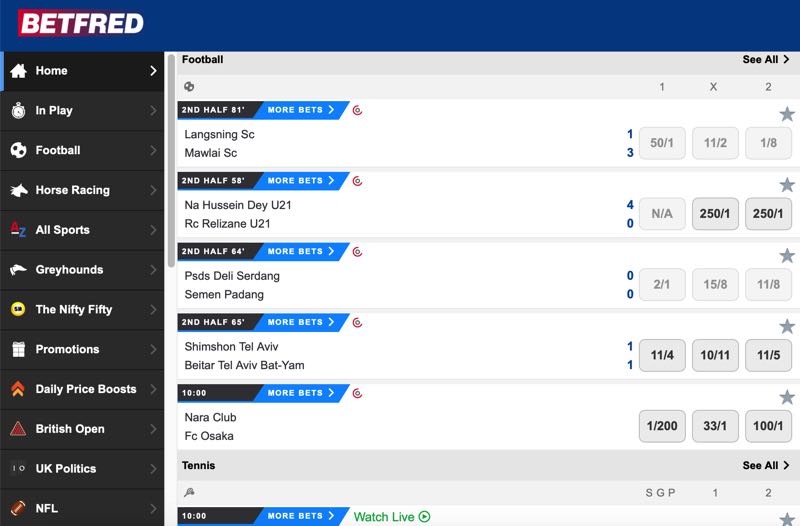 Betfred are one of the oldest bookmakers in the industry. They’ve been a round since the sixties and in that time have managed to evolve from a high street bookmaker into an online bookmaker. Whilst they still own numerous shops, its safe to say that the majority of their revenue now comes from online, which is probably true for a number of operators with a similar makeup.

The site is pretty diverse and it’s just generally a really good all-rounder. It sounds a little vague to be saying that as one of their ‘positives’, but it just does everything really well. It’s tough to pick faults in companies that have been about as long as they have, but then no one is perfect, not even Betfred.

When signing up to Betfred you are going to be able to get a £40 in bonuses when you deposit and place your first bet of just £10 or more at odds of evens or greater.
Claim Offer
New customers only (18+). Always BeGambleAware.org.
Key Terms - New 18+ UK customers only. Register using the promo code WELCOME40, deposit and place first bet of £10+ on Sports (cumulative Evens+) within 7 days of registration. First bet must be on Sports. £30 in Free Bets and £10 in Free Spins (50x20p) credited within 10 hours of bet settlement. Free Bet stakes are not included in any returns. Bonuses have a 7-day expiry. Payment restrictions apply. SMS verification and/or Proof of I.D and address may be required. Full T&Cs apply. #ad 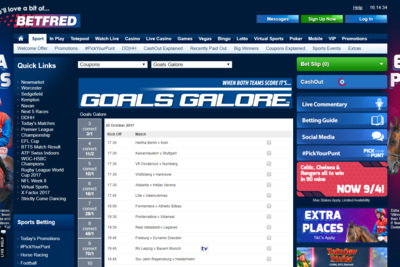 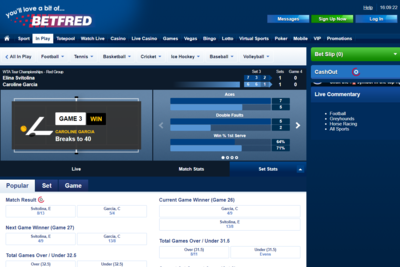 For us the Betfred site has one downside and that’s it’s design. It hasn’t changed an awful lot for over a decade now and it’s starting to become really dated. The first thing that really sets it back is the menu system on the left hand side. It’s a drop down menu which means that you don’t actually move from the page until you get right in the nitty gritty of your sport.

Now, we know some people actually see this as a positive and like this function, but we like to move about onto overviews of sports to see what’s going on and then working our way through. Each to their own we suppose, but for us, we think it needs a really good re-design to really take it to the next level.

Their saving grace comes in the form of their mobile betting app. We think it’s blooming great and much easier and functional to use than their online variation. The app is available on a number of devices and platforms, such as iOS and Android.

You don’t become one of the best bookmakers in the industry by not offering up a ton of betting markets to choose from. The site has a bias towards football and horse racing, with these two sports offering up a huge portion of the overall site in terms of market coverage.

Outside of this, they aren’t light by any means when compared to other bookies. The likes of tennis, cricket, rugby, golf, American football and so many more are well covered.

The pricing structure is another reason why they have done so well for so long. Comparing them with the elite is pretty easy and whilst they aren’t always best price, we found that they were never far behind. In terms of being an all-round solid option for betting on a week-in, week-out basis, you can’t go too far wrong with Betfred.

Probably their standout feature is innovation for betting markets. They have come up with two in particular which are the Goals Galore lists and the Double Delight/ Hat Trick heaven. These have almost revolutionised betting markets for football and are definitely one of the reasons why accumulator betting is so popular in today’s market. But, not only are they popular, they offer up great value, especially the Goals Galore list. By picking the right games you can get as much as 30% better odds than backing the same bets elsewhere. 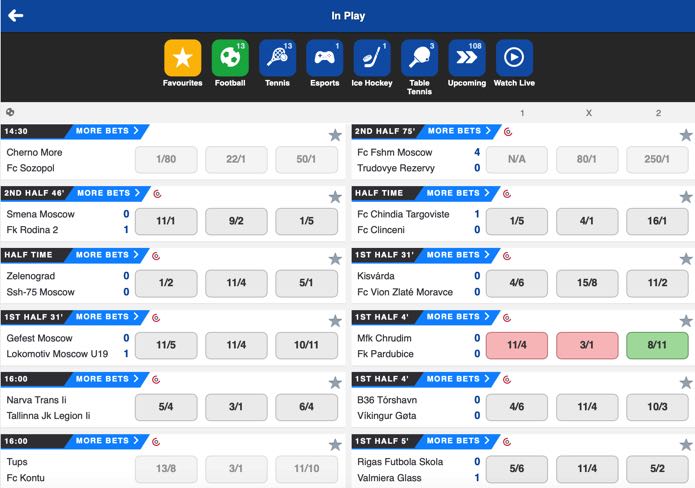 Betfred have a pretty decent live betting section, although we would say it’s also probably their weakest section. They have revamped it in recent years so at least now it doesn’t look awful, but it does lack certain features such as live match centre and a smooth integration with betting markets.

The live streaming channel is probably their biggest success in more recent times and not only that, you get 2 channels to choose from. The first is your general sports channel which allows you to choose from a series of sports such as football, tennis, basketball and greyhound racing. The second is their UK and Irish Racing channel, which brings you all the horse races from up and down the country.

It’s worth noting that whilst access to both channels is technically free, you will need a funded account of £1 or more for the sports channel and for the racing channel you will need to have wagered £1 or more on that specific race to watch it.  You should also be aware that the racing channel is streamed live from Racing UK, which would otherwise need a fairly sizeable monthly subscription. 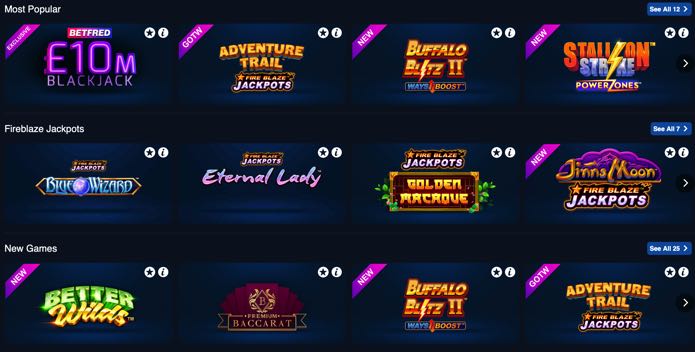 The company have a long and rich heritage in the world of the sports betting, but the casino didn’t come too long after their inauguration online. In that time it’s seen quite a few different variations of the site and with it have had a number of software developers come and go.

The casino at Betfred is fairly good looking, although we must admit that it’s not one of our favourites to play on. In fact, it’s very similar to that of the sportsbook in that it’s really starting to look a little dated now and in desperate need of a freshening up, which the majority of their main competitors have already done. It’s not terrible by any means, and we liked the fact that it highlighted games that were available on mobile as well as a search function that actually works, it just needs some attention in our opinion.

The mobile app came much later than the online casino and we think that this should be your first port of call if you are looking to get into the brand. The app work brilliantly well and the design is much stronger than online. It’s not perfect though and we felt as if sometimes it was a little laggy when going from the lobby into the games, but this could be to do with the fact that the games are mixed from so many software providers than anything else.

The casino at Betfred doesn’t have a huge number of games to choose from, with around 150 in total. Now, compared to some of other casino brands who have in excess of 500 games across the board, this may appear that Betfred is lacking, but to be honest, 1050 games is all the majority of players are ever going to need and the we felt what they did have, worked.

We liked that the casino was able to include a ‘New Games’ section, so you could keep up to date with all the latest releases on site. We weren’t sure exactly how often they updated, but there were a couple of titles that we hadn’t heard of, so assume they were very new to the market.

It’s the slots section that was able to offer the largest number of games to choose from and with it we were able to pick from a great little selection. We mentioned about them being slightly smaller in terms of games than some and the more we worked our way through the casino, the more we actually appreciated this. You aren’t going to be overwhelmed by hundreds of slots at Betfred, constantly wondering if you are playing the best game for maximum returns.

We were really pleased to see so many table games, as this is often an area that gets overlooked when the number of games is reduced. You get around 40 or so to choose from, which include baccarat, roulette, blackjack, red dog, sic bo, jacks or better and several forms of video poker as well.

You have a steady number of live dealer games to choose from as well, with blackjack, roulette, baccarat and live Hold’em. The live dealer section is actually one of the latest additions to the casino, so it’s still very much in ascendency.

With over 50 jackpot games to choose from, we think that might be at worst one of, if not the biggest jackpot section we have ever seen. The range of games is huge and it’s clear that they have definitely targeted this to try and lure punters in.

What’s good is that all the games are run across their developers network, so the jackpots increase much faster then if they were just on the Betfred site. The bigger games include Jackpot Giant, Beach Life, Spamalot and Funky Fruits, with all of these being well over the £1milllion mark at the time of writing.

The banking options are pretty impressive with a whole host of the usual suspects, including Visa, MasterCard, Neteller, PayPal and many more. With each of them any deposits that are made will start from a minimum of £5 apart from bank transfers, which will start from £85. No fees are charged for deposits.

Withdrawals are similarly easy going, with no fees to pay at all. Times will vary depending on your deposit option, so bear that in mind. Generally you find that e-wallets will be processed within 24 hours, whereas debit cards will be 2-5 working days, if not sooner in our experience.