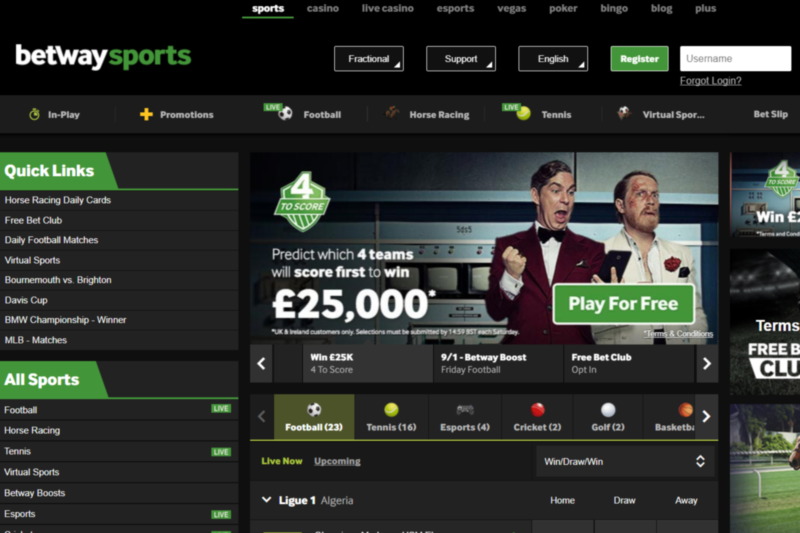 Betway have only been about since 2006, but in the last decade or so have managed to create one of the standout bookmakers of their time. The site has seen many different faces and there have been times where they simply weren’t up to scratch. But, that’s far from the case these days.

They are best known for being a true all rounder and there is very little they either don’t cover or they don’t cover well. The site is now home to a plethora of professional sports bettors who are able to not only get competitive odds, but are also able to take advantage of a massive range of markets to expand their betting armoury. 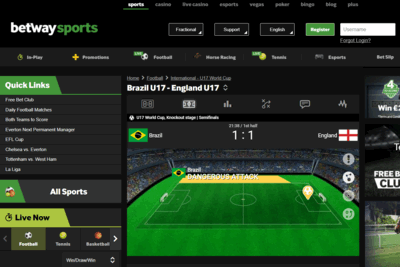 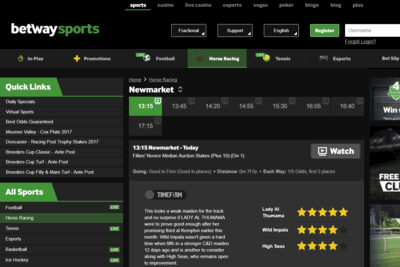 The design here has divided opinion in the betting industry for some time now. People argue that it’s now a little dated and the black/green/white colour combination is tough on the eyes, especially with the relatively small text. Style is always very subjective though and we actually quite like how Betway looks.

The mobile app, for us at least, is a much stronger component to the makeup of the brand. With it you are able to quickly jump between sports and markets, which allows you to place your bets faster. The integrated betting slip works really well and doesn’t intrude on your browsing of the site whilst allowing you to see what you’ve added.

One area that Betsafe have worked hard on is their marketing. We realise that all brands do these days, but coming with new ways in which to maximise exposure is always interesting to see. One of the ways in which they have done this is by increasing their sponsorship. They currently are the shirt sponsor of West Ham United, but on top of that they also provide sponsorship for major sporting events, none bigger than the Betway Premier League of Darts.

It’s tough to fault the betting markets and sports that are currently on offer. Coverage is very strong for higher profile sports such as football, where you are going to get tens of thousands of markets to bet on alone. In fact, we would even go as far as saying that when it comes to football betting, they are one of the best we have seen.

They have vastly improved other sports as well, with horse racing, tennis and golf being notable mentions. It just so happens that at the time of writing the Wimbledon Championships are taking place and their coverage is simply superb. Each game gets a huge range of markets and there are plenty of promotions running alongside it as well. Whilst this coverage is specific to this tournament, it should give you an idea at least of what to expect, especially around major sporting events.

The pricing structure on offer is very good and we have consistently seen that Betway are right up there with some of the best prices. But, from our research we did find that for the odd bet that we tested they did struggle in the middle of the pack. As we say, this was few and far between, with no complaints generally on odds from our end. 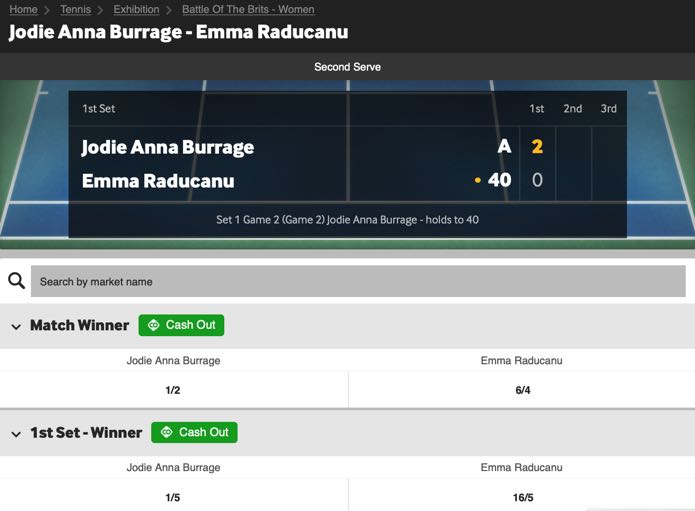 The live betting section has been a brilliant addition and is one of the better ones that we have tested. The first thing to note is the number of games that are on offer, which is massive. The range of sports is great as well, and whilst football makes up a large percentage, areas like tennis, cricket, rugby, darts, golf and many more all add to the overall package that you get.

Each football match will come complete with a live match centre. This is allows you to track progress of the game and watch a live simulator-type platform to see up to date information showing what’s going on. It’s a fairly common feature with the major bookmakers these days but Betway’s is undoubtedly one of the most interactive and best looking that we have visited. 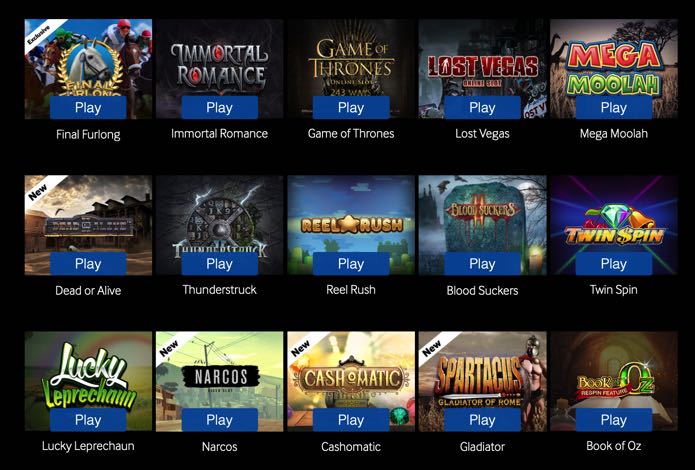 Over the years Betway have grown more into the online casino industry than any other. They have been able to provide a massive range of markets to choose from and with it provide an excellent option within the industry.

The design of the site is an area that they have not only massively improved, but now also excel at. The design is like no other that we have seen, which is impressive itself given how many casinos there are these days, with the black, blue and white text as a base layout. We really liked how the online version was almost like an app, being able to switch easily from a number of games, but also they include a ‘demo’ play feature allowing you to try games for free without having to risk real money. If you are new to these games, then we highly recommend you utilise this feature first.

The app can be downloaded on all smartphone devices and with the current format of the site being dinged using HTML5, it allows for an exclusive layout on all mobile devices from smartphones to tablets. We think that the mobile app rivals that of the online site and whilst this isn’t uncommon these days, it is fairly uncommon to see two variants of the same casino perform so well.

What’s unique at Betway is that they only use one software provider for the whole casino, which is that of Microgaming. The plus side is that Microgaming just so happens to be the biggest and the best in the business at the minute, so there is no shortage in the number of games that are on offer. Also, as Betway and Microgaming have an exclusive partnership, it often means that they are able to get exclusive access to new games released from the company, getting them weeks before they go on general release (if at all) to other companies.

Slots are where the bulk of the action takes place at the casino, but you may be surprised to see that they only offer a fairly average number of games to choose from, compared with most in the industry anyway. Having said that, whilst numbers are down somewhat, the quality is right up there with the best and we particularly enjoyed trialling games such as Lost Vegas, Forbidden Throne and Jurassic Park. They also offer a good range of retro slots as well, which go back to the early days of online casino, but remodelled. For those who are slightly older, this is going to be a nostalgic section to how casino games used to be, back in the day!

The table games section surprisingly has more games than the slots, which we think might actually be a first. You get a choice of roulette, blackjack, craps, 3 card poker, baccarat, Pai Gow and sic bo.

Whilst it may come as a surprise to see so few games on an online casino, especially in the slots department, we actually found it quite refreshing. You weren’t barraged with hundreds of games to choose from and the themes of the games at Betway meant that you can access a good range.

The live casino is much improved on site and we think it’s one of the best that you can get. They include a number of jackpot games for it, as well as High Definition tables and around the clock games. Formats of the live casino include roulette, blackjack, baccarat, dream catcher, casino hold’em, 3 card poker, stud poker and Texas hold’em.

Whilst the overall range of slots is quite low on site, the range of jackpots is as good as you will find. As they work exclusively with Microgaming it means they are able to access some of the biggest and best jackpot games, such as Mega Moolah, Major Millions and Treasure Nile, with each of these games being able to provide jackpots well in excess of the £1million mark.

The banking options on site and pretty straight forward and are made up of a mix of debit cards along with e-wallets such as PayPal, Neteller and Skrill. Banking times will range from just a few hours for e-wallets up to 5 days with all other methods.