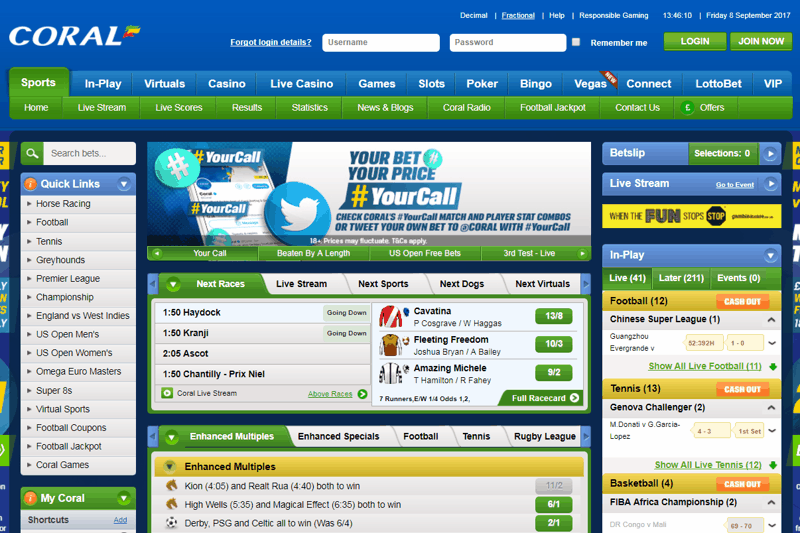 As one of the world leading bookmakers, Coral is going to be a betting home where you aren’t going to get any unwilling surprises. They are solid in every sense of the world, right from the number of sports that they cover, down to the features that just add extra layers of class.

What’s great about using such a bookmaker is that you are getting everything under one roof. They might not be the best in every department, for example pricing, but they’re never far away. They are the ideal standalone bookmaker, meaning that if you are the type of punter that likes to just use one site to keep things tidy, then Coral is going to be a great shout. 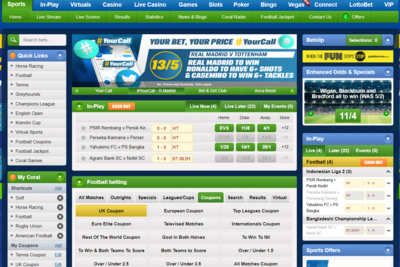 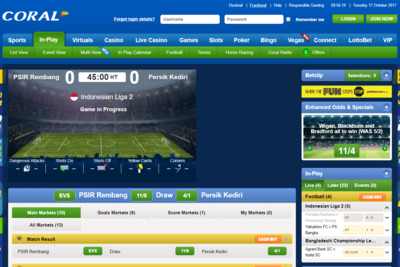 The site is one of the best looking that you’re going to find in the betting industry. The blue, yellow and green colours make the site look vibrant, modern and above all else, very functional. The downside to the design has to be the inclusion of the marketing offerings in the far right and left borders, which does make it look a little cluttered.

The mobile betting app is one of our highest rated on site and its design is almost flawless. The ability to use Touch ID to log in scores massive bonus points for us and we feel that this should be a standard feature in the industry. The app can be downloaded on both iOS and Android devices, whilst other mobile devices simply need to visit the bookmaker from their smartphones browser and they will automatically be redirected.

All this praise comes on the back of a solid foundation that they have been able to achieve since starting out 1926. The merger with the Gala Group in 2005 saw them as one of the biggest gambling firms in the world, bringing in astonishing revenue figures of around £1.2 billion in 2013. The Gala Coral Group subsequently joined forces with Ladbrokes in 2015 creating Britain’s biggest bookmaker.

As you would expect from such a big brand, there is no let up in the range and size of the betting markets that are on offer. With them you’re going to be able to choose from dozens of sports as far fetched as Australian rules, E-Sports, volleyball and even water polo.

The bulk of the markets, and the main reason why so many people flock to the site, are on football and horse racing respectively. When the football season is in full flow there are few places that are better to use than Coral. They are able to offer over 200 betting markets per match, with a range that is rivalled by very few.

Horse racing is a little lower key, but is much more consistent with dozens of races on offer almost 365 days of the year. What’s great is that Coral don’t just cove races from the UK and Ireland, but also include racing from South Africa, Australia, France, United States, United Arab Emirates and many more. The race cards have also seen a bit of a make over in recent years, with the introduction of information from the Racing Post to help you improve your choice in selection and hopefully win more frequently.

Pricing wise, Coral are very consistent. We’ve tested dozens of different markets from a multitude of sports and often found that Coral are right in mix with some of the best odds. We touched earlier about many bettors using an operator such as them as a one stop shop for online betting and the pricing on offer has to play a massive role in their decision to do so. 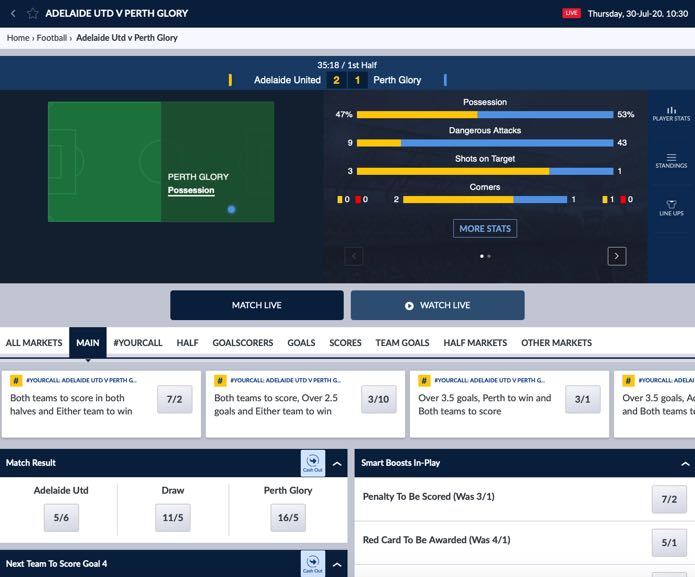 Live betting hasn’t always been Coral’s strongest point if the truth be told but it’s seen massive improvement recently. The standout feature for us has to be the inclusion of their ‘Match live’ section, which enables you to see what’s going on in a match at any given time. For football you can determine which team is in possession, if they are on an attack and it also highlights when goals have been scored, throw ins, free kicks, corners and yellow/red cards.

The multi-view is another great feature as it allows you to pick several matches to bring those games and their respected markets into a more condensed view. It’s perfect for if you are betting on more than one match when tracking your bets.

The lives streaming platform is another feature that is fairly new and gives you access to a good range of sports from around the world. With it you are able to watch these games on your PC, iPhone, iPad or aAndroid device via the Coral app. It will include over 2,000 streams every year on sports such as football, tennis, snooker, rugby, darts, basketball, badminton, handball, ice hockey and volleyball. It’s wroth noting that for football they have access to some of the biggest leagues in Europe, such as La Liga, Serie A, French League 1 and the Dutch Eredivisie. 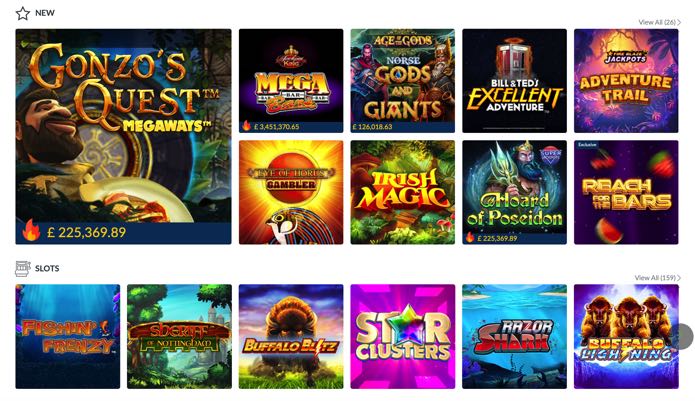 Coral are actually one of the few casinos these days that are run in house, by the Gala Coral Group. Whilst brands like Gala and Eurobet are now part of the group, the casino has been able to flourish on a pretty unique design and layout, which is rare and welcoming to see given how many sites look very similar these days.

Whilst we wouldn’t go as far as saying that the online site is no frills, it’s one of the more simplistic casinos that we have tested and one that we think works as well as any. The site is able to create a really cool gaming opportunity for its players and the ability to jump between games and different game types is an area that Coral perform particularly well.

The app follows a similar trend to be honest and whilst we think it’s probably the preferable platform of choice between the two, there really is very little between them. The mobile app is available to download on both iOS and Android devices or alternatively you can just visit the casino via your smartphones browser to access is, allowing for a more streamlined version on tablet devices as well.

Coral really hit a sweet spot in terms of the number of games that are on offer, with over 300 throughout the casino in total. We think that this number is just the right amount between being overwhelming and too thin on the ground for a wider variety of casino customers. Given that they utilise software developers such as PlayTech, NetEnt and Ash Gaming, the casino has a much larger library of games to choose from, which highlights that they don’t just add games for the sake of getting more impressive game numbers, a trap that many casinos fall into these days.

The slots section is the HUB of the casino for us and also where you are going to find the majority of games. The one downside to this part of the casino is that the quality of games can vary somewhat, at least from the games that we tested. A few standout titles that we wanted to make you aware of included Man of Steel, Green Lantern and White King, all of which offer a great range of features and bonus rounds. Throughout the site you will see that there are a lot of branded games, which is good as it’s often these games that are the ones to add that extra layer of quality throughout.

Table games are made up predominantly with blackjack and roulette, which comes as little surprise to be honest. There are over a dozen variations of each game, each having their own unique twist. On top of that you are going to be able to enjoy games such as Pai Gow, 3 Card Brag, Red Dog, Sic B, Baccarat and Caribbean Stud Poker, to name just a few.

The live casino is compact, but all you are ever going to need from this section of a casino. Games include roulette, blackjack, Hold’em, baccarat and Hi-Lo, with each table being specially designed to work seamlessly with these games.

We weren’t actually able to determine which developer these games come from, but they do differ slightly between location so we would assume that they are selected from a variation of software providers. Games are all available in HD and each comes with a good chat feature, be it chatting to the dealer or other players at your table.

The jackpot section has over 40 games to choose from, which is one of the biggest that you will find. They range in terms of jackpot amounts, with games such as Jackpot Giants, Monty Python’s Spamalot and Gold Rally all consistently being well over the £1million mark. You will also get to choose from a few jackpots games outside of slots, such as progressive blackjack and Caribbean Stud Poker.

Players at Coral are also going to be able to take advantage of a Coral Connect card. This allows you hook up your account to use in Coral betting shops and with your online account. You can get your cash over the counter from your account if you wish or alternatively load your account with cash ready to use either in store or online.

Why Don’t F1 Teams Just Copy the Fastest Car? After All, Imitation is the Sincerest Form of Flattery

Could Punters Be Limited to £100 Per Month Under New Government Guidelines?

Could Mike Tyson Become the Oldest Boxing World Champion of All Time?