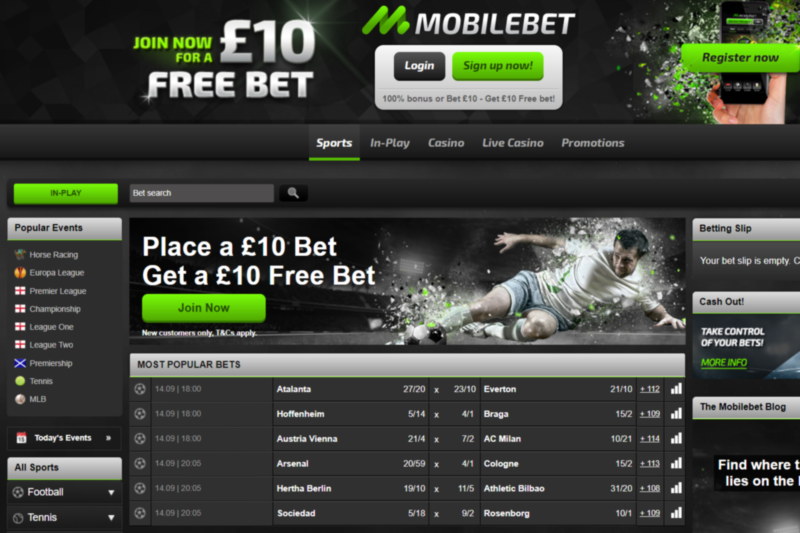 Mobilebet have only been about since 2014, making them one the new breeds of online betting. As the name would suggest, it’s was the mobile market that they originally set out to target, but that soon expanded, with an online version of the sportsbook quickly appearing on the scene.

Those behind the brand have clearly worked hard in making it an innovative betting site, which can see as soon as you land on page. They cover a massive range of sports and with it  a good range of betting markets to choose from. This all adds to the ‘complete’ feel that they are now able to offer. 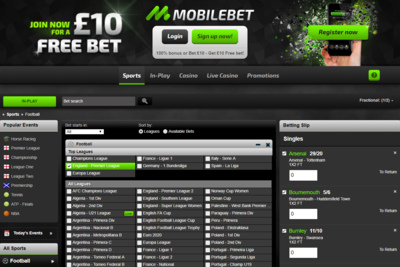 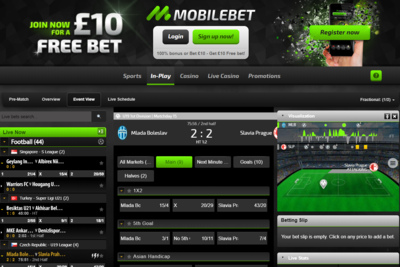 There’s a really interesting twist in terms of design, which allows MobileBet to standout from the crowd. The green, black and white colour scheme is really distinctive. Whilst the overall layout will be fairly familiar to those that have used some of the smaller brands previously, it still is able to offer up a quality betting experience.

The mobile site is the company’s bread and butter and as we mentioned, was the first launch for the brand. What’s great about this is that they are doing things back to front from the norm by bringing mobile betting before online betting. The app is available to download on iOS and Android devices, but if you enter the site with any smartphone you will instantly be re-directed to the mobile version.

We preferred using the mobile version rather than the online site and whilst both serve a purpose, via mobile makes jumping between sports and markets that little bit easier. The site contains a casino offering as well, the mobile versions carries much less in terms of advertising for that, which can be a little intruding when you are using the full site.

One of the best features on site, and probably the most surprising, was the sheer number of sports that they were able to cater for. They ranged in terms of the number of markets on offer, but fans of football, horse racing, American sports and tennis aren’t going to be left disappointed.

Football clearly plays a huge part in the makeup of the betting markets and whilst most people who use the site will be likely to bet on this sport, it does make it a little one dimensional in our opinion. Having said that, they are able to provide a good range of football betting markets. It was particularly interesting to see how well it works for accumulator betting, giving you the option to choose from certain markets in a long-list layout.

Another interesting inclusion and market that is simply exploding at the minute is that of E-sports. More and more bookmakers are starting to provide comprehensive coverage of the major leagues for the popular games, all of which can be found here.

One of the few downsides that we found was the general pricing structure. From the markets that we tested we found them at best to be average, but all too many times they were falling just short of what we would expect from one of the top bookmakers.

The in-play betting section is arguably the hub of the sportsbook for us and it’s here where we found that they performed really well. The first thing to note is the number of games that went live and the number of sports that were covered. Without being able to say exactly how many games switched to live betting, we would put the number at around 80%, which is a high conversion rate.

The live betting section also includes a ton of data on certain matches, with everything from goal attempts to the number fouls in a game. The Visualization graphics will show you what’s going on in games, be they football or other sports such as basketball and tennis.

The online casino is probably one of the more interesting aspects to Mobilebet, mainly because they added it after their mobile version. Whilst the concept of the mobile casino was great, they quickly realised that the online sector is still an essential accompaniment, so they need credited for developing one quickly.

The site looks pretty good, although we would say it’s by no means the best in the industry at the minute. The black, green and grey colour scheme is quite eye catching and we liked the fact that the casino utilised a structured menu system, which then allowed them to break the casino down somewhat. The inclusion of a search function and the ability to save games within your profile adds another layer of depth to proceedings. We also liked that they clearly state which games can be played both online and mobile, so you can easily switch across.

The mobile app is our favourite part of the casino and we think their strongest aspect in terms of design. The casino is based on an HTML5 platform, which basically means that whichever device you are using, the casino will adapt to that device. So, if you are on tablet it will look slightly different (in a good way) to that if you were on your smartphone. The app is easily functional and we found that jumping between different games and game types was really easy and a key part of mobile casino.

Mobilbet have recently expanded their casino to include a lot more games than when they first launched. The casino now utilises several game developers, which include PlayTech, Microgaming and NetEnt, three of the biggest and best in the industry at the minute. With over 400 games to choose from, the range is really solid and not too overwhelming, especially if you are new to the industry. As we mentioned, the games offer a good range on mobile as well, which it should given that the site is so mobile focussed.

Like most casinos, the games department is predominantly made up from online slots, of which we thought had a really good range. What we liked is that whilst the bulk of the casino is made up from the bigger game developers, there were god ranges from some of the smaller ones, which meant that you get a wider range to choose from.

With over 20 table games to choose, you get to access a fairly good range, without ever being the ‘wow’ factor of the casino. Due to the design of the games, we would suggest that they are all from the same software provider, but can’t 100% confirm that. The games are actually all really engaging though and whilst a good number are variants of both blackjack and roulette, you do get to choose from a number of other games such as Casino Hold’em, Caribbean Stud Poker, Oasis Poker, Pontoon, Red Dog, Baccarat and Punto Banco.

The live casino section is one of the newest sections on the site. They are powered by Evolution Gaming, who are one of the best for these game types. As they are predominantly network based, it means that you are a going to be able to enjoy a much wider range of games around the clock. The games have a really good chat facility and with it you are able to play the majority within their High Definition network.

With over 10 jackpot games, it’s pretty much what you expect from a casino of this size. It is worth mentioning that within the slightly limited number of games on offer, they do include some of the biggest paying games of all time, including Mega fortune, Major Millions and Arabian Nights. You also get the majority of these games available on mobile as well, which is an added bonus.

There is a fairly decent range of banking options with that include Visa, MasterCard, Apple Pay Neteller and Skrill, to name but a few. What’s great is that all methods can be used via the Mobilebet app and deposits start from as little as £8, maxing out at £8,000 with Skrill and Neteller. Fees of up to 5% may be charged, deposits are processed instantly.

Withdrawal options are little more limited, with a couple of the deposit options not being accessible for this. Withdrawals will start from £10 and max out at £8,000 per day. You will get two free withdrawals each month and then you will be charged £4 per transaction from then on before it resets again at the end of the month. E-wallets such as Neteller and Skrill will be processed within 24 hours and all other methods will take 2 to 7 working days.