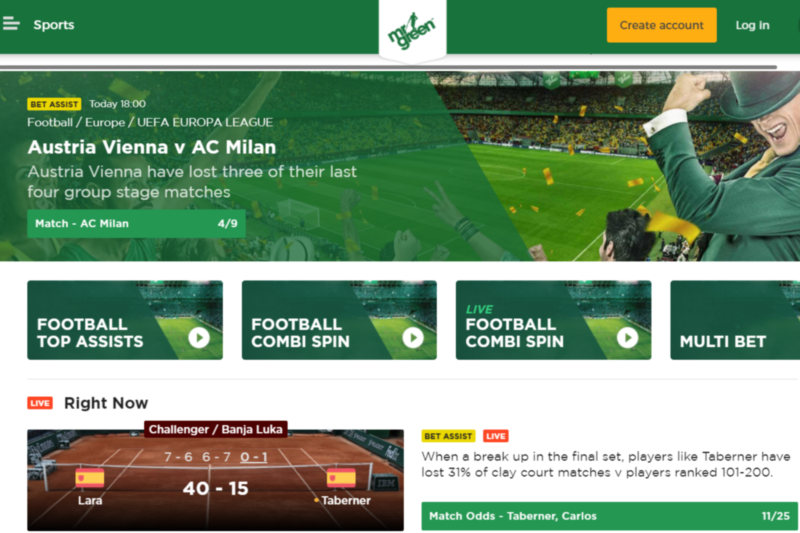 Mr Green has been one of the fastest growing gambling brands over the last decade. It’s crazy to think that they have only been about since 2008 and are now widely regarded as one of the major online casinos. It shows how hard the company have worked to get to where they are today.

Whilst their casino has been extremely successful, they have been working hard on bringing a sports betting package worthy of living up to the brand name. It’s taken a bit of time to develop the site and bring it up to scratch, but the latest release of their sportsbook has sent a huge message of intent to the rest of the industry. It’s rare to see anything that Mr Green develop not work, so we expect big things from them.

Advertiser Disclosure – If you claim an offer or sign up through our links we may receive payment from Mr Green. This has not affected the content of our review which remains independent. 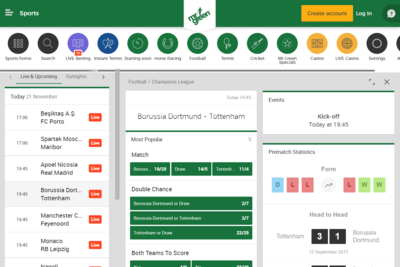 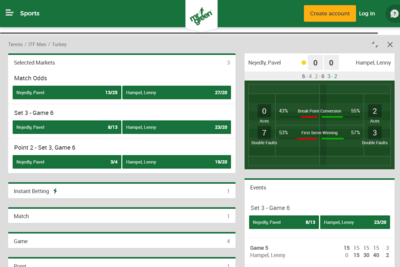 One of the ways that Mr Green has been successful is in their design process. They have continued to make each section of their site look beautiful and we are pleased to say that the sportsbook is no different. It works in a similar fashion to some of the other mainstream brands in the industry, but the green and white colour scheme allows it to really standout.

On their website you will be greeted with a number of up and coming markets, as well as a smattering of live bets. We really liked that at this stage you aren’t overwhelmed with what’s going on and allowing you to find your own way through the site and to where you need to be. The navigation isn’t the easiest thing to spot first up though, and you will need to draw your eyes to the green boxes for different sports at the right of the page.

The mobile app follows a similarly high standard and is available for download on iOS and Android devices. Other smartphones simply need to view the site in their mobile browser and you will be instantly redirected to the mobile version. You can add the homepage to your home screen which will essentially do the same job as the app.

You get to access a decent number of betting markets at Mr Green and whilst the sports on offer do vary quite significantly in terms of depth, there is still a good range to choose from. Football is king at Mr Green and it’s here where they have invested a huge chunk of their time and resources to make it as strong as possible. We really liked the fact that you were able to choose between games from dozens of countries and then a good range of leagues and competitions within.

Other sports on site certainly don’t get the same coverage that football get, but notable mentions must go to horse racing, tennis and American sports (American football, baseball, basketball and ice hockey) which are all more than adequate for the majority of punters.

The downside of the site is the lack of markets to bet on. Football is always a good sport to gauge on market depth and with less than 100 to choose from with even the higher profile matches, it does standout as the reason why the sportsbook perhaps doesn’t get as many punters as it could. We know that the majority of bettors aren’t going to need to choose from 200+ markets all of the time. With a handful making up the vast majority of bets we do still feel that there is more than enough here for the masses.

The pricing structure at Mr Green is actually really good. We were impressed that they have consciously gone out to create a solid sportsbook on the back of strong odds and we could easily see why people use them as their only bookmaker. But, it did vary a little in the sports that we tested, with lower profile sports and leagues having some pretty big discrepancies in what was on offer. 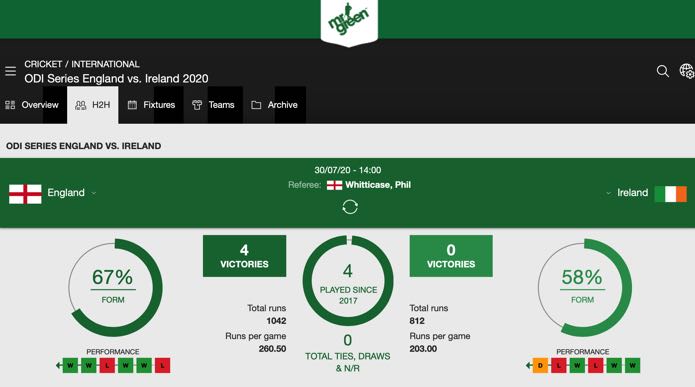 The live betting section contributes greatly to the site and we found it really tough to criticise. It appears that a large number of games eventually turn live and whenever you are in you get a good number of markets to bet on, for most sports at least.

The inclusion of the live match centre is another positive and the ability to see what’s happening in a match at any given second really does add to the drama of your bets.

The company’s rise has been impressive to see. As we mentioned, they were probably one of the first of the standalone casinos to really break through into a market that was dominated by brands who have way more experience and funding behind them. But, that didn’t deter Mr Green, with the team behind the brand being able to understand what people were looking from an online casino and ultimately delivering that.

The first thing that you need to have for any successful casino is a good design. Mr Green is probably one of the best that we have come across for this and we think that they are a leading light for many. The online site allows you to work through a number of categories to find exactly what you are looking for or alternatively you are able to just scroll the whole range of games, although this could literally take days as there’s that many.

The mobile site follows a similarly, successful design process and again we think it could be one of the best in the business. The site allows you to jump quickly between games, but not only that, you are able to play on each game as if it were properly designed for mobile. It’s been clear that Mr Green have been very particular about which games that they include on this platform, such is the high standard on offer.

The site has well over 400 games to choose from and we think that really is the sweet spot for online casino. We have reviewed some rooms that have over 800 and it’s way too many, although we’ve seen other reviews think otherwise. When you have around 400 it’s not too many that new players are going to be overwhelmed and it gives you enough options to keep playing the games for years to come without ever getting bored.

Mr Green has been a long advocate of using multiple software providers and today is no different. They use over a dozen in total, with some of the bigger brands including PlayTech, Microgaming, NetEnt and Evolution Gaming. They are able to integrate the smaller brands to plug gaps that the bigger brands have, creating a great balance throughout. As the site is able to enjoy this range of games, the punters are the real winners as it creates balance, something that is very important, but also very rare.

The slots section is where the majority of the action falls, which comes as no surprise really. It allows you to access a really good range of games and we noticed that they aren’t just full of their main game providers, but take the best bits from most of the providers that they are currently using. Some of the more standout titles for this included Big Bang, Lights, Flowers and Reel Rush. Don’t forget that they also include a lot of branded games as well, whose class goes without saying really.

The table games section has always been good at Mr Green, but we feel that over the last year or two they have really stepped up their game. They haven’t increased numbers dramatically as such, but they swapped out poor games for better versions, which is key. You get your usual plethora of blackjack and roulette games to choose from, along with the likes of baccarat, punto banco, red dog, pai gow and plenty more.

Another area that’s been heavily developed recently is that of the live casino. This comes packed with over 30 games to choose from, utilising a number of different software providers, but predominantly are powered by Evolution Gaming. The games are all available in HD and the chat functionality makes them very engaging from a playing point of view.

With over 20 jackpot games on offer, there are few that do this section as well as Mr Green. The site is able to tap into a number of games that are run across outside networks from the game developers. This means that you will likely see them on several sites, but also means that the player numbers are greater, massively increasing jackpot numbers.

Standout games include Arabian Nights, Mega Moolah and Mega Fortune. It’s worth noting that there are a couple of jackpot games that aren’t slots, such as Caribbean Stud Poker and Texas Hold’em Bonus.

You’re going to get access to a good range of banking options at Mr Green, which are made up of debit cards, e-wallets and online top up cards. You can deposit on site for as little as £10 and each transition is free of charge.

Withdrawals are processed within 24 hours for e-wallets and between 2-5 working days for all other methods. The minimum transaction for a withdrawal is £30 and you get 1 free withdrawal every 7 days. Request that exceed this number will incur a £1 fee for any amount under £100 and 1% for another amount over £100.