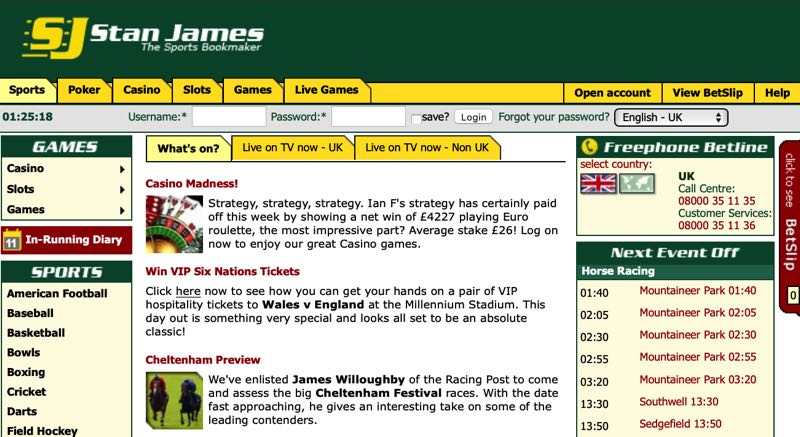 Stan James the bookmaker may no longer exist but it bowed out of the industry as a real success story. Built from the ground up, Stan James founders, Steve Fisher and James Holder, turned a one-branch betting shop into a huge multi-million-pound business. Their eventual departure had nothing to do with mismanagement or dwindling popularity, rather another company stumped up a large amount of money to buy out the brand. The sale did not immediately spell the end of Stan James but a few years later it was merged with the parent company, Unibet. 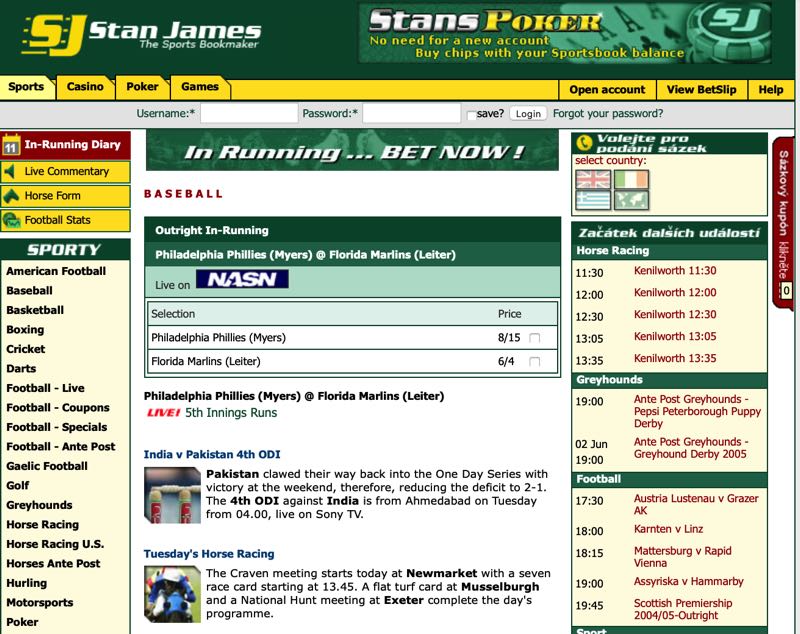 Steve Fisher and James Holder launched their first Stan James betting store in Wantage, Oxfordshire back in 1973. The name of the company combined the first two letters of Steve’s name, plus his wife, Anna (Stan), with the name of co-partner, James. It was, therefore, not what many people assume, simply the creation of a bloke named Stan James.

Part of the Stan James business strategy was to snap up or join forces with other businesses. In December 2007, they purchased Betdirect from 32Red for a sum of £5.75m. Initially, they let Betdirect continue as normal but, in February 2009, the brand became part of Stan James. The same year they reached an agreement with Austrian Betkick Sportwettenservice GmbH to create SJBET, which opened physical stores in Austria and Germany.

Stan James always had an eye on both bricks and mortar stores, as well as online ventures. In 2008, they bought out the online betting company betterbet.com while in 2010 they acquired 27 PageBet stores following their bankruptcy. Given how frequently they swooped in to own smaller companies, it seems rather fitting that an even bigger fish came in to swallow them up a few years later.

In July 2015, it emerged that the Unibet Group had struck a deal to acquire Stan James. This included full rights and ownership of the brand, plus access to their customer base. For this, Unibet agreed a fee of £19m which was payable in cash but was to be adjusted based on the customer liabilities (active bets) that Unibet would inherit.

When such deals occur, no matter what the business, there are always some fears that some employees might lose their jobs. This was not the case here though for the approximately 150 Stan James employees based in Gibraltar. As per standard EU regulations, the employees simply had their contracts transferred over to Unibet so it was largely business as usual for them.

In the five months prior to the deal being struck, Stan James had amassed earnings before interest, taxes, depreciation and amortization of £1.4m. Second-quarter reports also showed the company had 84,266 active customers. By taking over a successful and well-established company, Unibet CEO, Henrik Tjärnström, believed they could strengthen their position in the UK online market. It was an area in which Unibet had only just become active and the minimal overlap between the two brands allowed them to broaden their scope.

Physical Stores Not Part of Deal

In the press release, Tjärnström specifically mentioned the ‘UK online market’ because the £19m deal did not include the Stan James stores. Because Unibet owned the rights to the Stan James name now, however, this meant that all the stores would need to be rebranded following a transitional period.

Rebranding all shops meant paying out a seven-figure bill because signage cost £10,000 plus 20% non-recoverable VAT per store. Unfortunately for Stan James owner, Steve Fisher, this great expense could not be staggered over the space of a year. Although the transitional period itself was a little over 12 months, Fisher believed you could not have some shops as Stan James and some as the new brand. Rather, he believed any rebranding effort needed to happen immediately across the nation so there was no element of confusion.

While costly, it was not enough to put Fisher off approving the purchase of 37 shops from Ladbrokes Coral in October 2016 following their merger. The two betting giants were forced to offload some stores and Stan James swooped in to grab a small portion of them (with Betfred claiming the remaining majority).

After some deliberation, Fisher and his team eventually settled on the name MegaBet to replace Stan James. In the summer of 2021, there were 47 MegaBet stores located across the United Kingdom including five in the county where it all began, Oxfordshire. This is considerably lower than the 80-90 locations Stan James found itself with early on in 2016 but industry-wide trends did see most bookmakers reduce their physical presence during this period.

By 2017, Stan James had disappeared from the high street and by 2018 they no longer existed online either. For 18 months, the Unibet Group (now the Kindred Group) had run StanJames.com as normal with customers not experiencing any kind of change. The Swedish company took the decision in February 2018, however, to absorb Stan James into Unibet. This meant the closure of the Stan James website with all visitors instead redirected to Unibet.

For Stan James customers, what happened was that their accounts were transferred over from one green and white website to another. If they already had an account at Unibet, then their Stan James balance and active bets were simply added to this. The transferring of customer details and balances went smoothly ensuring minimal levels of customer dissatisfaction. Some were no doubt far from thrilled to move but many would have been won over quickly given all the extra and improved features Unibet boasted.

Now Stan James lives on only in essence through Unibet, gone but not truly forgotten. With Unibet quickly taking over the many sponsorship commitments Stan James had, it is a name we have not seen for a while but many former customers will still remember it fondly.