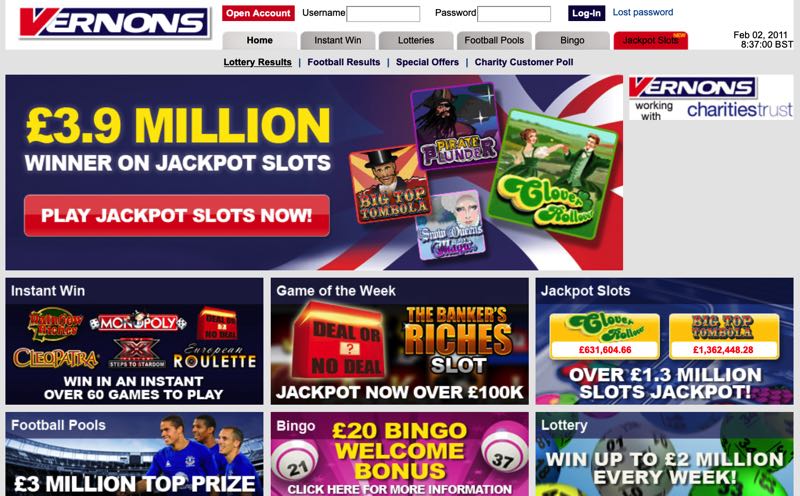 For most younger bettors out there, the name Vernons is very unlikely to ring any bells. Although rather forgotten about now, Vernons used to be a major name and a highly recognisable one too. Despite enjoying several decades of success, the brand failed to keep pace with modern trends and ultimately bowed out after several changes of owners. Keep on reading to find out more about the rise and demise of Vernons.

Few betting companies can boast a history quite like Vernons. The firm was set up in 1925, two years after John Jervis Barnard created the football pools. The idea of the pools, which initially struggled to take off, relied on lots of people betting on the outcome of selected games. The winner(s) received all/a share of the pooled money, minus a small chunk to cover costs.

Littlewoods first launched a football pool in February 1923 and although they only initially sold 35 coupons outside Old Trafford, business soon picked up. Other companies quickly noticed this rising demand and in 1925, Vernons was set up as a rival pool betting company. They were one of the earliest to join the market but a decade later they faced over 20 competitors, such was the popularity of this kind of betting.

By getting in there early, Vernons were able to become a major player in an absolutely massive market. By 1936, the annual revenue of pool betting was around £30m, which in today’s money would be comfortably over £2bn. The market was so big in fact that two-thirds of the postal packets sent in the UK were pools postal entries.

Companies like Vernons faced opposition from the Football League, who resorted to delaying the release of fixtures to Thursday (long-distance) and Friday. There was also some opposition from the government too but neither was able to halt pool betting in its tracks. Instead, the football pools industry was able to flourish and at its peak, it boasted 10m weekly players. 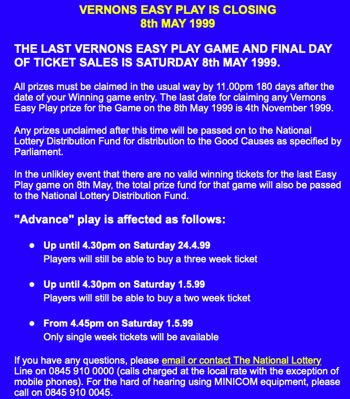 The first National Lottery draw took place on 19th November, 1994 with a total prize pot of £5,874,778. Suddenly, people across the UK had another means of winning a huge sum of money with just a small stake. All they needed to do was to pick their lucky numbers. It proved to be a tempting alternative for many with millions making the switch from football pools to the lottery.

By 2007, the lottery had eaten up so much of the football pools customer base that only seven hundred thousand were left predicting the football scores this way. Vernons themselves were hit so hard by the introduction of the lottery that they closed their pools operations after just three months. Instead, they joined forces with the enemy, the National Lottery, to launch a new lucky-dip game called ‘Easy Play’ which covered the 1998-99 football season. They did, however, return to pools betting after this. 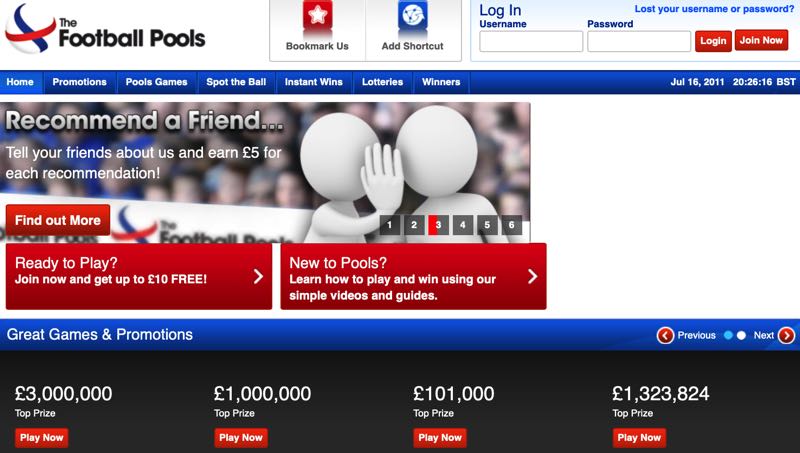 When stock in Vernons was relatively high, Ladbrokes had swooped in to purchase the brand with the deal completed in 1989. Little did they know that their investment would lose masses of value just a few years later. Despite the challenges though, they were able to flog the business in 2007 for a princely sum of £50m. At the time, Vernons was still turning a profit in the region of £5m (pre-tax) but numbers were getting smaller year on year. The buyer was a company called Sportech who owned the other major pool betting company, Littlewoods, as well as a more minor brand, Zetters.

Although Sportech’s purchase of Vernons gave meant they controlled 98% of the pools market, the deal was approved by the Competition Commission. Ladbrokes were no doubt relieved by this given that Vernons was very much on the decline due to waning interest in the pools. For Sportech, the deal represented a major risk but one that allowed them to offer much bigger jackpots given they had virtually monopolised the market.

Given the position they found themselves in, Sportech chose to merge their three brands into one called the New Football Pools (later Football Pools), which launched in August 2008. Customers were able to play online (footballpools.com), by mobile phone and in betting shops. In addition to classic pool betting, customers had access to more modern twists as the new brand was targeted at younger bettors. The relaunch was supported by a £5m promotional campaign as confidence was high that the pools could return to former glories.

The creation of the new football pools did not mark the end of Vernons however. The brand was kept on but as a more traditional online bookmaker. They no longer offered pools betting but the Vernons website did come equipped with a casino powered by PlayTech technology, plus lottery and bingo games.

Pumping money into a declining industry is always a gamble and in this instance, it did not pay off. In 2017, Sportech sold its football pools division to private equity firm OpCapita in March 2017 for £83m. This deal represented a major loss given that the pools divisions was formed from the purchases of Littlewoods (£161m), Vernons (£50m) and Zetters (£1.35m).

By this point, Sportech had already sold off the Vernons brand too while it still held some value. It required just £3m for NetPlay TV to acquire Vernon’s customer database of 367,000 players, plus their other various assets. Although a small fee in relation to many bookmaker deals, it was a perfectly good deal for Sportstech given that Vernons had been struggling in the months prior. Despite a greater focus on marketing, the brand reported an operating loss of £0.7m for the first half of 2013.

End of an Era

It was impressive that Vernons was still doggedly holding on to survival but it could not quite make it to its 100-year birthday. The end of its long history came soon after Swedish company Betsson AB bought NetPlay TV for £26.4m in 2017. In doing so they acquired brands SuperCasino, Jackpot 247 and, of course, Vernons.

The purchase of NetPlay TV was triggered by Betsson’s desire to gain a greater foothold in the UK market. Despite the intention though, the websites they inherited were not proving to be a success, Vernons included. By this stage, it was a tired brand with a tired website so Betsson decided it was best simply to kill it off, doing so in 2019. SuperCasino fared no better with the gambling TV channel last airing in 2018 but Betsson were at least able to make a success of Jackpot247.