A whopping £650m is wagered upon the Grand National in this contemporary age, and – as we know from basic market economics – much of that will go on the horse identified as the bookmakers’ favourite.

But how often does that work out to be a smart move?

It’s a fair question given that a decent percentage of the money that comes in will be from ‘casual’ punters, who are enjoying their once-a-year turn on the Aintree showpiece. So how ‘smart’ is that money, given that many will be backing the favourite blindly?

If we inspect the history books, we note that the favourites rarely have their way in the National, with just four favourites – two of those joint-best – taking the spoils since the turn of the millennium. 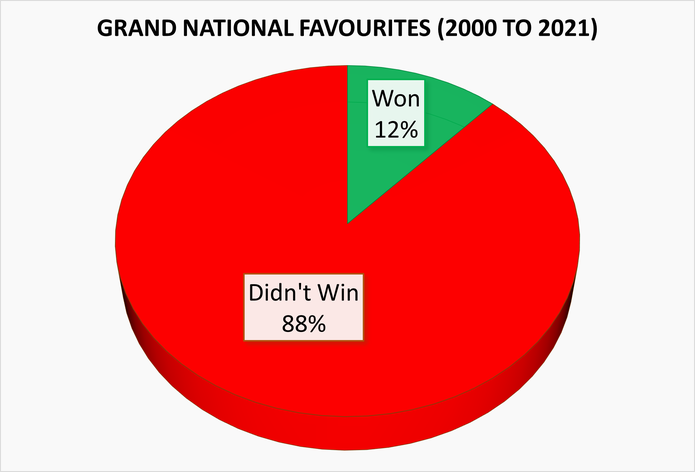 Are you willing to risk your hard-earned on a bet that has a 12% chance of landing, according to the stats? It’s a bold move.

Of course, there are some caveats to be made. All favourites aren’t born equal, and some are stronger contenders than others. Remember, there HAS to be a favourite, even if a whole bunch of horses appear to be on an equal footing courtesy of the handicapper.

And there are all the unforeseen things that can go wrong on raceday. There could be a bad fall, a jockey can be unseated or a favourite can be unceremoniously dumped to the Aintree turf by a fellow faller.

The Grand National is an unpredictable, often spectacular, long distance race, and its unknowns are what make it the spectacle that it is.

Here’s a look at the most recent editions of the race, with a reflection on how the favourite ran:

The favourite for the 173rd Grand National was Cloth Cap, wearing the yellow and green colours of Trevor Hemmings.

After a strong run to win the Ladbrokes Trophy at Newbury, Jonjo O’Neill’s runner completed his Grand National prep with an impressive win at Kelso, defeating 2019 Ryanair Chase runner-up Aso by 7½ lengths.

Tom Scudamore held Cloth Cap at the head of proceedings for the first lap at Aintree, tracking the inside rail. Despite Jett streaking ahead, those on Clot Cap would’ve been quietly confident with the leader in touching distance. Things can change quickly in jump racing however and four fences from home the nine-year-old weakened rapidly and was pulled up with three to jump.

The 2018 Grand National hero Tiger Roll returned to Aintree in 2019. Heavily supported by the public, Gordon Elliott’s charge went off as 4/1 favourite to repeat his success of twelve months previous and he didn’t disappoint his backers.

Racing handily in the mid-field for the first circuit, Davy Russell moved to track the leaders on circuit number two. Mistakes at the fifth and fourth from home kept the millions watching on their toes but as the field stretched out, Tiger Roll cruised to the front, outjumping his nearest rival, Magic Of Light, at the last to secure victory for favourite backers for the first time since 2010.

At 4/1, Tiger Roll was the shortest priced winner of The National since 11/4 shot Poethlyn way back in 1919.

Hindsight is a wonderful thing, of course, but the 2018 Grand National confirmed what we suspected: Tiger Roll is a phenomenal horse.

He won the race by a head from Pleasant Company (25/1), and would go on to win the Boyne Hurdle and the Cross Country Chase at the Cheltenham Festival to confirm his status as one of the best long-distance horses around.

As for the favourite, Total Recall, things did not go according to plan. He, with Paul Townend on board, made a catalogue of errors at these testing National Course fences, and was never in the picture for a chance of winning.

Weakening in mid-field and miles behind, the Irish horse was pulled up with two to jump, and a rather large quantity of betting slips were thrown on the fire in unison.

The 2017 edition of the Grand National was ran on typically quicker ground than normal (good-to-soft) and that suited the bookies’ favourite, Blaklion, who had won the RSA Chase on a similar surface.

And Nigel Twiston-Davies got a decent run from his charge, with Noel Fehily tracking the leaders for much of the race and gliding into the lead with four to jump.

He was driven on but didn’t quite have the gas in the tank, and was easily caught in the run in.

One For Arthur and Cause of Causes took on the charge, and it was the former – under the ride of Derek Fox and at a general 14/1 – who took the tape in first place by three-and-a-bit lengths.

In the end, both Many Clouds and the Last Samuri went off as 8/1 joint favourites for the 2016 Grand National.

The former ran prominently to begin with under a ride from Leighton Aspell, and challenged for the lead in the first half of proceedings. But under the top weight of 11-10 – always be sure to check your horses’ handicaps before placing your bets – the toil was too much and he eventually disappeared from view to finish last of the horses that completed the track.

The Last Samuri ran a race far more in line with what we’d consider a favourite, and he was ride in the thick of it even after the last fence had been jumped.

But the last few hundreds yards were a real grind, and David Bass could not find any extra yards in his horse’s armoury.

Instead, it was Rule the World – a largely unconsidered 33/1 poke – who finished the strongest, and he took the line by six lengths to score a surprise victory for Mouse Morris and his team.

Many Clouds was made joint-favourite for the 2016 edition on account of his run at Aintree 12 months prior, where he just squeaked home by a head to land the big prize.

With Aspell on board once more, the horse produced a stellar finish to get the job done. Taking the lead with five to jump, he was given a shake by his jockey after landing clear of the last.

Saint Are was approaching fast, but May Clouds defied a 11-09 handicap to land Trevor Hemmings his third Grand National winner in a decade.

As for the favourite, Shutthefrontdoor, there would be no National swansong for A.P. McCoy, whose charge has nothing left with two to go, and after running left in the closing stages was headed off and had to settle for fifth place.

Many fancied Double Seven, under the ride of McCoy, to take care of business in the 2014 renewal. And he gave it a good go, riding hard in the latter stages to finish in third even if he made minimal impact on the winner.

The other joint favourite, Teaforthree, delivered a nightmare verdict for his backers. He was in touch at roughly the halfway point, but a blunder a the infamous Chair jump saw Nick Scholfield hit the deck and punters slapping their foreheads in unison.

In the end, it was Pineau De Re that won the day for that man Aspell despite a far-from-fluent performance, but his lower handicap gave him the edge in the run-in from Balthazar King and Double Seven.

If you’re a fan of large data sets, then how does those stat grab you: since 1900, there have been ten clear favourites and four joint-favourites to win the Grand National, which clearly isn’t the best of returns.

Indeed, if you had a single pound on the favourite every year in the Grand National since the beginning of the twentieth century, you’d now be down to the tune of £24.75.

Food for thought if you plan on blindly backing the favourite at the next Grand National!