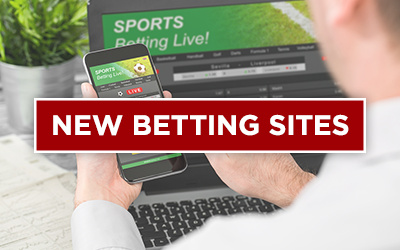 If you’ve already burned through the welcome bonuses on the front page, then you’re in luck because we have even more of them on this page.

Below you’ll find a list of new betting sites made up of both brand new bookmakers as well as a few lesser known sites. There’s also a number of online casinos who have decided to launch sportsbooks included in the list.

Despite being in their infancy, all of the sites above have been thoroughly vetted and meet all the basic checks for licensing that’s required in the UK. We’ve also given them a once over to remove any sites that don’t really seem to cut the mustard. What you’re left with are legal sites hungry for you business and who are (usually) willing to work a bit to try and get it.

Obviously you you’re not going to find the same kinds of features and coverage that you would get at the big super-bookmakers, but if you’re after offers and a bit of variety then they’re worth checking out.

How Easy is it to Launch a Betting Site?

The ability to gamble online has probably been as revolutionary to the betting industry as the legalisation of high street betting shops was back in 1961. The ease in which we can now access these sites throughout our smartphones and tablets from pretty much anywhere in the world has almost made them part of everyday life for some.

As a result, there has been an influx of new betting sites that have been springing up in the marketplace, trying to get a piece of the action. Whilst there are plenty of regulations that need to be adhered to, it’s actually a fairly simple process and there are a number of ways in which they could set up.

The first and most obvious route that a company would take is to simply set up as an independent shop and go it alone. This basically means starting from scratch under a new identity and then being able to gain all relevant licenses from the likes of the UK Gambling Commission.

The positives to this are that the company are in full control of their site and everything has to go through them. It also means that any success they have will mean they get to keep a larger percentage then if they weren’t independent. They’ve no one to answer to in terms of how they go about running their business (assuming all gambling commission approved) and with it are pretty much free to offer up any markets at any prices they want.

The downside to this approach is that it’s very tough to get your foot through the door as a brand new site. As you can see from the betting companies we have listed above, there is likely at least one or two that you’ve never heard of before and it’s down to sites like us, to help get the word out.

It’s also going to need a lot of financial backing to take this approach. The company will not only need to be able to cope with any betting demands from their punters, but also things like marketing and licensing campaigns can be long, arduous and very expensive, without any guarantees of success.

Whilst setting up a new bookmaker from scratch is both expensive and time consuming, once you’ve done it it’s actually quite easy to set up another one. After all, you already have the license, traders, developers and traffic. For this reason it’s quite common to see sites pop up with second or even third brands that are run almost identically but under a different name.

A great example here is ComeOn and Mobile Bet. Both run by the same group and using the same software. Sometimes you’ll notice a few differences between the sites if they’re looking to target a different demographic, but often there’s very little difference between the brands.

Setting up a sister site also allows businesses to get almost immediate exposure. You will see that often bookmakers have links to other brands that in their “stable”, so with it are getting a good stream of marketing as a result.

A good example of this is the fairly recent release of 32Red Sport in the list above. Whilst their casino is a big brand already, they are fairly new to sports betting. The 32Red brands was recently acquired by Unibet who then became known as the Kindred Group.

As we’re sure you’re aware, Unibet are an established bookmaker and because of this they were able to quickly deploy a sports section on the 32Red website enabling them to offer a while new product to the existing customer base.

This will likely work both ways and we wouldn’t be at all surprised to hear that the team from 32Red have helped grow the casino sector of Unibet.

White labels are sites which don’t operate their own software, and instead enter in to a partnership with a platform to license their software and take advantage of the teams they already have in place for setting odds, handling promotions and dealing with payments.

Unlike the sister site example above where the new brands are actually owned by the same company, a white label brand is unconnected to the white label provider. In this scenario it’s a B2B relation ship where third party software companies allow unrelated parties to operate on their platform – for a large fee, of course.

By working under the wing of an established provider the white label brand is offered a quick way to get into the gambling industry, especially when it comes to licensing. In order to operate legally in the UK a betting site must be licensed by the gambling commission. And as you can probably imagine, getting a license is a long and expensive process. White label brands are able to side-step this requirement by operating under the master license that the software provider already has. 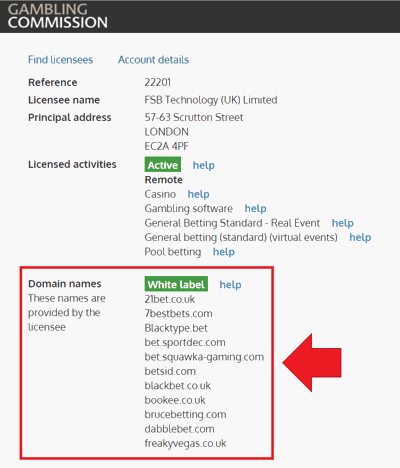 This may seem like a bit of a loophole for rogue bookmakers, but in fact it puts more emphasis on BettingCo to take an active role in making sure that these sites, who are essentially representing their brand, are compliant. If the Gambling Commission deem they aren’t, then it would be BettingCo who lose their license along with all white labels that are connected to them, meaning the repercussions would be catastrophic.

Another advantage that the white label has is the ease and speed at which they can be deployed. For this reason you’ll often see white labels set up by non-gaming brands who already have a high level of exposure. For example, The Sun set up a betting site called Sun Bets using a Tabcorp white label which they then advertised in the paper and on their website – utilising both their existing readership and brand recognition to acquire customers.

Despite the speed and ease with which sites can be set up, and the fact that it it is significantly cheaper, it is important to realise that a white label site is totally dependent on the provider maintaining both their license and services. Sun Bets was forced to shut down earlier this year after Tabcorp terminated their agreement.

This lack of control is one of the main downsides to operating as a white label. Because they don’t have the freedom that an independent bookmaker would have as they have no choice but to dance to the beat of the licence holders drum. This isn’t always a bad thing as it eliminates the risk of ‘mickey mouse’ white label sites, but it does hamper the sites ability to grow and form it’s own identity. Or in extreme cases, such as Sun Bets, to stay open.