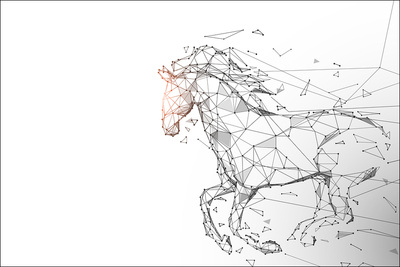 Just imagine if there was a way you could predict the Grand National winner without having to wade through reams of form, speed data and handicap history – and without needing luck to guide your horse home.

Imagine having access to an entertaining, professionally-produced video that significantly increased your chances of a winning flutter on the Aintree showpiece.

And imagine if you could gain an insight into the big race that was a bit more contextual than simply picking a horse with a funny name, or who will don your lucky number on their silks.

That, so far at least, has been the general concept behind the Virtual Grand National, an idea dreamt up by Inspired, a digital content provider in the gambling and entertainment sectors.

By using a raft of different technologies and insights, they are able to determine how they believe that year’s Grand National will be run, and using CGI they are able to create a stellar video representation of the four-mile slog.

So impressive is the production that ITV Racing have been using it in their own coverage on the eve of the National, and in 2019 some 1.6 million viewers tuned in for the greatest show on pixels.

And the best bit? So far the results emanating from the virtual race have been spookily accurate in predicting the outcome of the Grand National proper.

How the Virtual Grand National Works

The creative types at Inspired realised that by using some of the technology at their disposal, they could create an accurate representation of the Grand National that would be both entertaining to the viewer and also instructive into how the race proper would be run.

And so they set out about creating an algorithm that incorporated various data points about the competing horses, as well as the expected going and weather conditions, and added to that by also factoring the opinions of a carefully selected panel of horse racing experts. That gives them a representation of who might win, who might place, who will fall and so on.

Packaged up in Ultra HD using CGI modelling, Inspired have also painstakingly recreated every nuance of the Aintree track, including digital replicas of each of the layout’s famous jumps and obstacles.

Commentary is provided by Stewart Machin, who remarked ‘is this every punters dream – to tell the world hours in advance who will win?’, and the race is typically broadcast twice by ITV Racing: once on the Friday evening before the Grand National, and then again at some point on the Saturday morning of raceday.

How Accurate is the Virtual Grand National?

Established in 2017, there have only been three renewals so far but it would be hard to describe the Virtual Grand National as anything other than an outstanding predictor of how the actual race will unfold.

Here’s a quick guide to each of the races so far:

The inaugural running of the Virtual Grand National would have thrown up a couple of juicy each way returns for punters if they had followed its results in at Aintree.

Cause of Causes won the Virtual edition and out on the track he also gave a fantastic account with Jamie Codd on board, finishing in second place and securing a 16/1 payout for backers.

All told, the algorithm predicted six of the first ten horses home, with Vieux Lion Rouge (third in the Virtual, sixth in the race proper) also netting each way net wins for punters at 11/1.

Eager to prove that 2017 wasn’t a fluke, Inspired went one better with their Virtual Grand National a year later.

With a full field of 40 runners, they picked out Tiger Roll to become the first dual Virtual and real-world Grand National champion, scoring punters a handsome 10/1 winner.

In the end, only 12 horses completed the course and Inspired predicted six of them, cementing their reputation as a fantastic arbiter of the action likely to follow on race day at Aintree.

Punters were falling over themselves to back Tiger Roll for a historic National double in 2019, but Inspired felt there was another more likely champion.

Their algorithm opted for Rathvinden, who won by a virtual nose from the Gordon Elliott horse in their interpretation.

And, all told, they weren’t far away – Tiger Roll, of course, triumphed at Aintree for a second time, but Rathvinden was just five lengths adrift in third, banking backers an 8/1 each way payout.

The Virtual Grand National 2019 had Jury Duty finishing in third – he was unseated early on, as if to show the complexity of predicting this crazy race, while anyone impressed by Anibale Fly’s run in the Virtual would have been happy to bank an each way prize when the flesh-and-blood Grand National was run a day later.

The 2019 edition saw ITV Racing really get on board with the Virtual National, and they showed it twice: first on ITV4 at a primetime 8pm slot on the Friday evening, and then as a perfect aperitif to the main action at 1pm on ITV1 on the Saturday.

The coronavirus outbreak that swept through the sporting calendar also took the 2020 Grand National as a casualty too. We will still have the Virtual Grand National however, with the simulation to run at 5pm on Saturday April 4th on ITV, 15 minutes before the real race was scheduled to take place.

And so we’ll never know if Tiger Roll would have completed an infamous hat-trick – he may yet return in 2021 – but at least we’ll have some inclination with the Virtual Grand National to be aired and shared as normal.