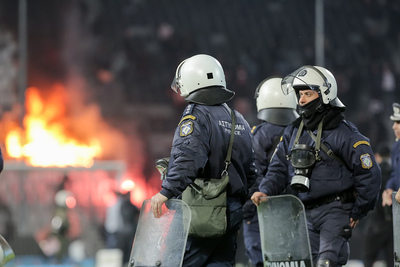 It’s not been a great week for those who insist that hooliganism and football violence is a thing of the past.

The organised brawls of the 1980s might be less prevalent – at least in public areas, anyway, but there is still episodes of spontaneous violence that can have severe consequences for those involved.

The scale of the trouble ahead of the weekend’s Copa Libertadores shocked many worldwide who saw the videos, but in truth there was nothing new to the scale of the aggression as far as Boca Juniors and River Plate are concerned.

This duo, who used to play in the same neighbourhood of Buenos Aires before River moved to more illustrious parts, battle it out in the ‘Superclasico’ each year, where running battles outside of the ground are nothing new.

It was, perhaps, the timing of the violence that shocked. The Copa Libertadores is the South American equivalent of the Champions League, so imagine the European showpiece game being postponed not once but twice because the Barcelona team bus had been attacked and Lionel Messi had nearly been blinded by shattered glass. That would be headline news around the globe.

While trouble between those two sets of fans in Argentina could arguably have been predicted, it’s the scale of the violence between two teams with seemingly little in the way of bad blood that concerns.

Here are just a few more examples of when ‘fans’ have caused carnage in high profile football matches around the globe, with the game delayed, abandoned or postponed as a result.

Ajax’s Champions League clash with AEK Athens in November 2018 is one such instance. There has been reports of running skirmishes between the two sets of fans the night before the match, but even so how somebody could get the materials to make a sort of Molotov cocktail, before having the brainlessness to throw it into a crowd of people, really does blow the mind.

Of course, these shenanigans are nothing new to the beautiful game, and terrace trouble has marred the sport for decades; either visibly so, as in the two cases above, or the less primal feelings of intimidation that you may experience when walking through a big city on matchday.

A Night of Shame in Dublin: Republic of Ireland vs England – 15th February 1995

England and the Republic of Ireland had met at World Cup 1990 on neutral territory, and the game passed off without a hitch.

Quite why, five years later, passions were stoked to the extent that a friendly between the pair had to be abandoned, is anybody’s guess.

It later transpired that the conspirators behind the trouble were Combat 18, a far right organisation linked to the British National Party and neo-Nazism.

The game took place at Dublin’s Lansdowne Road, but the problems began before a ball was even kicked: the Irish fans jeered the English national anthem God Save the Queen, while a section of the England fans reportedly sang ‘No Surrender to the IRA’ while the Irish anthem was played.

When the game got underway after a delayed start, Ireland took the lead after just 22 minutes. Four minutes later, England scored a goal that was subsequently disallowed, and this sparked awful scenes in the terraces.

The English fans were stationed in the top tier of the stadium, and they immediately began raining missiles down on the Ireland fans below them; including seats and parts of benches, which they had earlier ripped out of the ground. The Irish had no choice but to seek shelter out on the pitch.

The referee took the players from the field, and the game was never restarted. It was 18 years before the two sides would meet again.

It goes without saying that local derbies are often the root cause of trouble in the stands.

With passion through the roof and thousands of folks keyed up by the battle for local pride, often the mindless minority will make themselves known.

That’s exactly what happened when Hibernian met Hearts in the Edinburgh derby on that most placid of days – Halloween – in 2018.

Tackles flew in, noise levels increased, and it was only going to take one flashpoint for the volcanic atmosphere to erupt.

And that’s exactly what happened when Hearts had a late goal disallowed.

Neil Lennon – who isn’t always blameless in these incidents, it has to be said – was struck by a coin thrown by the Hearts fans, whose joy had turned to anger as the Hibs manager celebrated the disallowed goal in front of them.

The game had to be stopped for a matter of minutes as he received treatment, and later on Hearts’ keeper Zdenek Zlamal was sort of clotheslined by a fan as he went to retrieve a loose ball from behind his goal.

The last match at West Ham’s famed Boleyn Ground should have been a celebration of years of good – and, absolutely – bad times that the club endured at the stadium as they readied their move to the Olympic park.

Chaos outside of the ground, which included the visiting Manchester United team bus being pelted with missiles, caused kick off to be delayed by more than 45 minutes, and unfortunately some of the bad behaviour found its way through the turnstiles too.

David de Gea in the United goal was constantly targeted with a range of missiles, while a couple of pitch invaders delayed proceedings yet further.

It was a dark day for West Ham United, and one that would be repeated almost exactly two years later when their supporters fought amongst themselves in the stands and forced owners David Gold and David Sullivan to beat a hasty retreat before their protests turned nasty.

The contempt with which Charlton Athletic fans hold the club’s ownership team has led to some of the more amusing forms of fan disturbance that the English game has seen in recent years.

The first such protest dates back to April 2016, when Addicks fans launched hundreds of stress balls onto The Valley pitch in the first minute of a Championship clash with Birmingham City. The game was held up for more than five minutes as they were removed, with the players also tasked with helping in the clean-up operation.

The theme of disruption and delay continued in October of that year when Charlton hosted Coventry City in League One.

On that occasion fans of both clubs peppered the pitch with rubber pigs; a dig at the greed of their respective owners which has seen both fall from the Premier League to the third tier of the English game.

And then in August 2018 things took a turn for the fried. It was reported in the Evening Standard newspaper that in amongst a series of bizarre cost-cutting exercises headed by owner Roland Duchatelet, employees in Charlton’s offices had to seek special permission to eat crisps at their desk due to cutbacks on the hours of the club’s cleaning staff.

True to form, the Addicks’ supporters mocked the decision by throwing bags of crisps onto the pitch in the first minute of their game against Fleetwood Town. Once more, the pitch-side snappers photographed the players removing the ‘missiles’ from the field of play.

If You’re Angry and You Know It….Sit Down: Blackpool vs Huddersfield – 2nd May 2015

Like Charlton Athletic, the relationship between Blackpool’s fans and the club’s owners is rather fraught.

After years of neglect and a lack of financial input, the Seasiders finally snapped as they saw their side relegated to League One at the end of the 2014/15 campaign.

At the final game of the season against Huddersfield, a large number of Tangerines supporters made their way onto the pitch and conducted a sit-down protest in the centre circle; including, famously, the hilarious moment one fan slowly but surely made his way onto the turf courtesy of his mobility scooter.

The referee, naturally, was forced to take the players off the field, and the game was subsequently abandoned. It was never replayed either, with a 0-0 scoreline enforced.

A couple of years ago, fans of Dynamo Dresden in Germany’s second tier were regarded as some of the naughtiest around.

They were suspended from the German Cup in 2013/14 for a catalogue of offences including the lighting of banned flares inside their ground, and were on thin ice thereafter for a series of disturbances.

But those all paled into insignificance when RB Leipzig came to Dresden in August 2016.

For the uninitiated, Leipzig were originally a small club in the fifth tier of German football called SSV Markranstädt. They were taken over by the energy drinks firm Red Bull, changed their name to RB Leipzig and began climbing up the leagues following significant investment.

Many other clubs didn’t agree with such blatant commercialism, and a number of protests were held.

But Dresden took things one step further in a cup game with Leipzig. Their fans pelted the opposition players with coins, before throwing a severed bull’s head on to the running track around the pitch.

Previous Post: « The Superclasico – River Plate vs Boca Juniors: One of Football’s Most Passionate Rivalries
Next Post: Luca Cumani: A look Back on the Legendary Horse Racing Trainer’s Career after His Retirement »