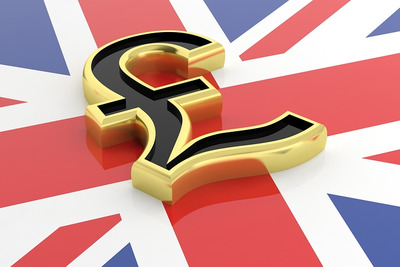 The summer showpiece of UK and Irish flat racing, Royal Ascot, will enjoy a significant bump in prize money in time for the 2020 meeting.

There will be more than £8 million up for grabs across the five-day festival in June, which is up more than £700k on the 2019 figures.

And the headline news is that not one but two races will offer £1 million prize funds for the first time in the meeting’s history.

Both the Prince of Wales’ Stakes and the Diamond Jubilee Stakes will see a comprehensive increase to the seven-figure mark in an attempt to lure the world’s best horses to Greater London.

Organisers hope that the royal meeting will eventually be worth some £10 million, and in 2020 the total available prize money offered at meetings throughout the year at Ascot – excluding British Champions Day – will be a cool £14.4 million.

With 30 races in total at Royal Ascot, organisers have confirmed that 16 of them will have a prize money increase of some kind, and no race through the card will be run for less than £95,000.

The likes of the Jersey Stakes and the Queen’s Vase will see increases of £20k and £25k respectively, and the aim is to appeal to connections of horses of all classes, according to the track’s director of racing and public affairs, Nick Smith.

“There are a lot of horses which are Listed, Group 3 and arguably Group 2 level who are trained in Britain but who are effectively farming these equivalent races overseas.

“It’s not just a question of saying we want to get the best Australian and Japanese horses – of course we do – but it’s also a question of making the prize-money down the field for these Group 1 races appealing enough for the outsiders in these race to stay here.

“We don’t want the Queen Anne to decimate into a five or six-runner race because the 16/1 and 20/1 chances have alternatives elsewhere. It is as important for us to set these races for domestic audiences as it is to promote them internationally.”

That said, you don’t pump up your prize money to an eye-catching one million mark if you don’t want to attract the best in the business both domestically and overseas.

And as confirmed by Guy Henderson, Ascot’s chief executive, the income generated from the meeting can help to boost British racing ‘through bloodstock and horses in training’.

“Our strategy is to increase the profile, popularity and prestige of Royal Ascot to drive international investment in British racing, which is so important.”

That £8 million prize kitty will put Royal Ascot amongst the most prestigious and money-spinning horse racing festivals on the planet.

And while on UK and Irish soil that will extend the meeting’s position as the most lucrative, from a worldwide sense it still lags way behind some of the more prominent international festivals on the circuit.

Just take a look at the Dubai World Cup, which offers a staggering prize pool of £26.9 million, or the brand new Saudi Cup meeting, where the Crown Prince has promised a knee-knocking fund of £26.8 million for those willing to make the trip to the Middle East.

Royal Ascot is the most moneyed meeting on European soil, consolidating its position over the Arc weekender (£5.7 million) and even jumps outings like the Cheltenham Festival, which dishes out £4.5 million to its participants.

Increasing the prize fund of the Prince of Wales’ Stakes and the Diamond Jubilee Stakes to £1 million will attract plenty of interest from around the globe, but again the reality is that this is a mere drop in the ocean compared to the big hitters overseas. 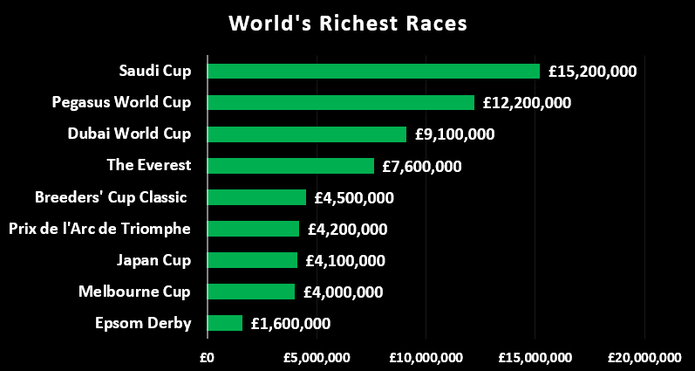 As you can see, the remarkable Saudi Cup will take top billing with a scarcely believable £15.2 million prize fund for just one race, with the winner trousering £7.5 million for their owners and the rest of the top ten sharing the remaining kitty.

The Middle East continues to be the richest ground for horse racing, with both the Pegasus and the Dubai World Cup both featuring prominently on our richest race ranking.

Australia also serves up some tasty fare courtesy of the Everest, the richest turf race in the world held at the Randwick course. Originating in 2017, the connections who are interested in entering must stump up a $600,000 entry fee just to get their horses into the stalls.

On European soil it is the Prix de l’Arc de Triomphe that takes top billing with more than £4 million up for grabs, while in the UK it is the Epsom Derby which pays out the best with a cool £1.6 million to be shared amongst its best performers.

Previous Post: « Will Amazon Prime Take Over Premier League TV Rights Permanently?
Next Post: Could the Foal of Winx and I Am Invincible be the Perfect Racehorse? »