One of the most basic tenets of a successful business is to make more money than you spend – even a five-year-old could tell you that.

But in the rarefied air of modern football, conventional wisdom tends to cast aside in favour of an all-out assault on success – be it winning silverware or simply avoiding relegation – at all costs.

Concepts like gainfulness and sustainability have long gone out of the window in a sport where oil-rich Middle Eastern oligarchs are willing to swoop in and buy clubs seemingly on a whim, so how refreshing it was to view the recently-released financial accounts of Brentford.

The Premier League new boys posted a loss of £8.5 million for the financial year up to June 2021, and while that’s a hefty sum of money by anybody’s standard, it is mitigated by the financing of the club’s new stadium.

For context, Manchester City posted a loss of £125 million during the 2019/20 season, which perhaps raises the point that financial performance is almost wholly irrelevant in football.

But, in the long term, will Brentford’s financially sustainable model give the Bees the last laugh on Manchester City and co?

In 2009, Brentford were plying their trade in League Two – their mere survival at risk as they faced financial implosion.

Taken over by boyhood fan, the betting supremo Mathew Benham, the Bees started to stabilise on and off the pitch.

But Benham is not a Saudi sheikh nor a member of the UAE aristocracy, and so his purse strings only stretch so far – unlike Man City or Newcastle United, he has had to be canny in how he brings success to his club.

So he has focused on the classic stock market mantra of buying low and selling high, developing young talents and then selling them on for a pretty penny. And this approach, which can be categorised by the net transfer spend metric, are extraordinary.

Here’s the net transfer spend of the current 20 Premier League clubs since 2017: 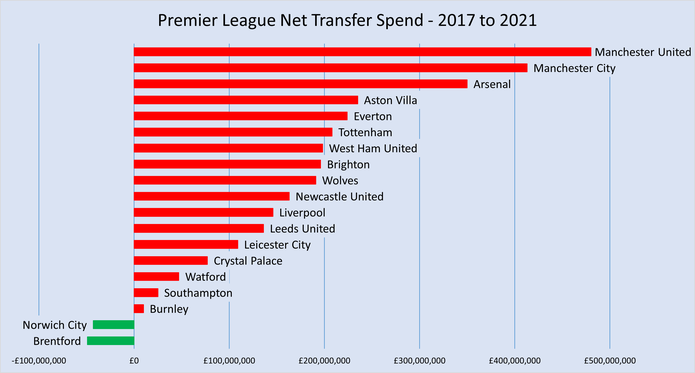 As you can see, Brentford and Norwich are the only two sides with a positive net transfer spend – that is, they’ve received more in transfer fees than they have spent.

The delicious irony for Bees fans is that, at the time of writing, they are level on points with Aston Villa in the Premier League table and one clear of Leeds United – in the past five seasons, they have yielded a net of £282 million and £185 million less than Brentford. 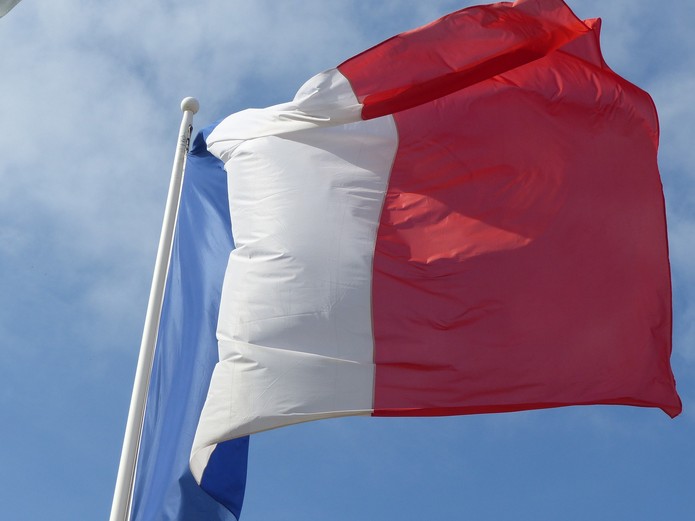 While Brentford are yet to translate their financial smarts into silverware, their French equivalent has been kicking up a storm in Ligue 1.

Lille have finished first, second and fourth in the French top-flight in the past three years – their title win in 2020/21 a victory of transfer market savvy and coaching genius from Christophe Galtier.

We don’t even need to tally up PSG’s transfer spending in the past five years to know their net spend is egregious (to say the last) in comparison – they have spent £200 million on Neymar and £130 million on Kylian Mbappe, to name just two, in that timeframe.

And yet, would you say that PSG’s spending has been worth it? Here’s their points totals, and those of Lille, since 2017/18: 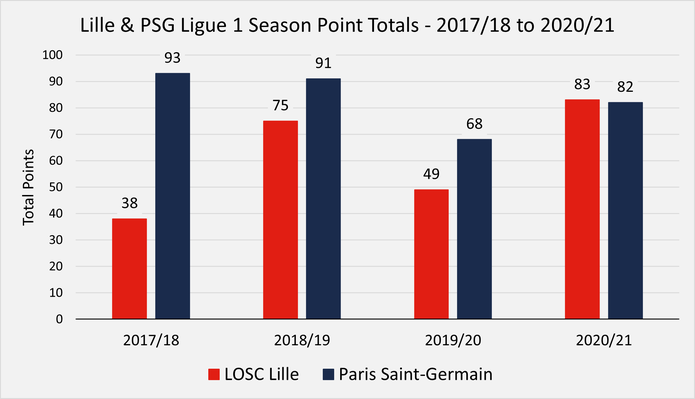 Clearly the Parisians have enjoyed superiority, but are the points differentials indicative of their outrageous spending? Factor in that they have yet to win the Champions League, and you might surmise that the fees forked out by the club’s Qatari owners have been a complete waste of money compared to Lille’s business-minded approach. 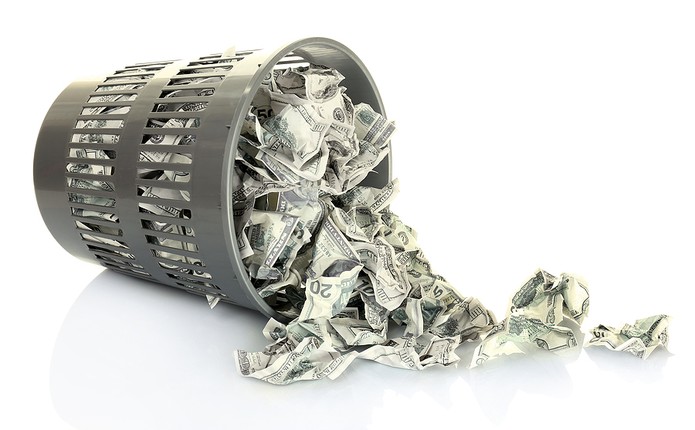 Fans of Manchester City and PSG will be snorting right now….so they’ve spend loads of money on players, who cares?

It’s a fair point when you consider their domestic trophy collections, and with Financial Fair Play laws simply not fit for purpose there really is no need for them to stop spending.

But if you put the brainpower of Benham into Manchester City, or Luis Campos – the genius behind Lille’s recruitment – in at PSG, how many Champions League titles would they have won each by now?

One day, it’s not beyond the pail that football clubs will only be considered investable enterprises if they can turn a positive yield for their owners and shareholders. At that point, supporters of Manchester City and PSG might not be laughing so triumphantly….