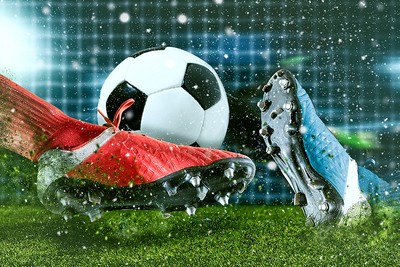 As the 2021/22 Premier League season draws to a close, it’s looking increasingly likely that Manchester City and Liverpool will occupy positions 1-2 in the league table at the conclusion of the campaign.

But in which order? That is, of course, the million dollar question.

Since Pep Guardiola and Jurgen Klopp joined their respective teams – 2016/17 being their first contended season in English football, they have shared four Premier League title wins (with a fifth, presumably, imminent). Assuming all goes as expected, the 2021/22 campaign will be the third time they have recorded the 1-2 finish as well.

There is, therefore, some conjecture as to which club is the more successful, so let’s take a deep dive into the history books and see if we can resolve the argument.

Since the rebranding of the old First Division to the Premier League in time for the 1992/93 season, Manchester City and Liverpool have won six titles between them….with City leading the way with five of them. 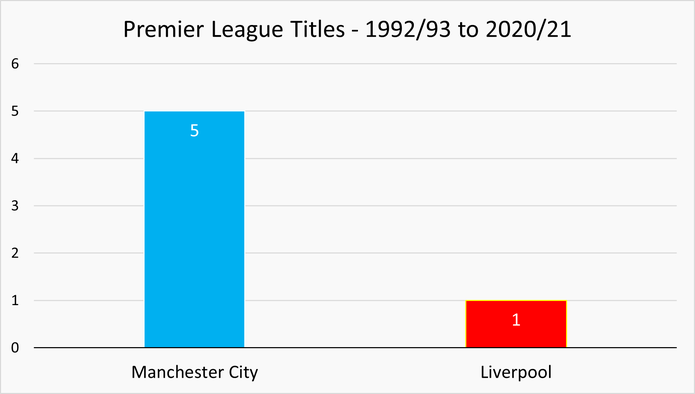 Unsurprisingly, the Manchester outfit’s success has come since they were bought out by their Abu Dhabi overlords in 2008. But what is surprising is that it took Liverpool – historically one of the most decorated clubs in English football – 27 years to finally get their hands on the trophy in 2019/20.

So that’s the nuts and bolts of the question answered, but we thought it interesting to look at both clubs’ overall performance in the Premier League since the competition’s foundation in 1992.

The results make for interesting reading….

Anybody born after the turn of the new millennium might assume that Manchester City have been the dominant force in English football for years, but the data above confirms that’s far from the case.

When we look at the finishing positions of the two clubs in the Premier League, we can see that Liverpool were the more successful side prior to the 2009/10 season, with the Cityzens dominating since. 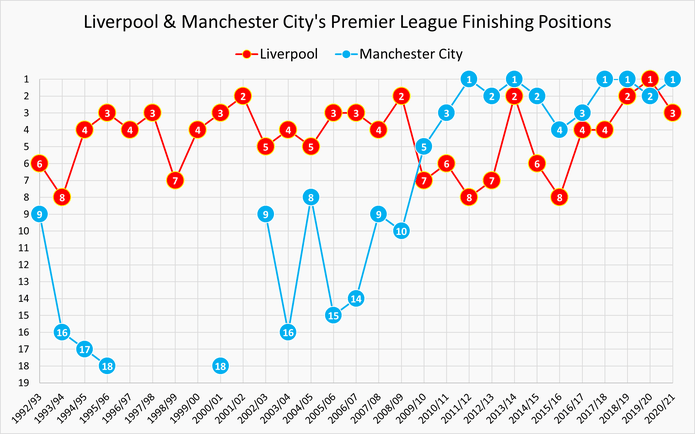 Of course, the top tier in English football has been contested for years….most trace the inaugural season of the First Division all the way back to 1888/89!

That’s lots of history then, and as we know a song that rival supporters like to chant at Manchester City fans is that their beloved club is one with no heritage to speak of as a silverware-winning machine.

That’s not strictly true, and prior to the Premier League’s takeover City actually won the First Division title on two separate occasions in 1936/37 and 1967/68. They have also finished as runners-up six times.

But it’s a record that pales into insignificance when compared with that of Liverpool. They clinched their maiden First Division title in 1900/01, and went on to win the competition 17 more times prior to the Premier League name change – that includes an incredible ten championship runs in a period of awesome dominance between 1975 and 1990.

So who were the most dominant English football team in the pre-Premier League era of 1888-1991? 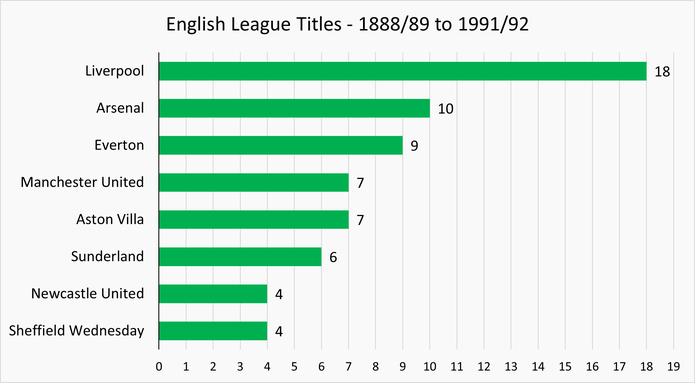 If anyone ever tells you that money hasn’t changed football, just show them this table of the most successful English clubs prior to the ‘cash years’ of 1992 to the present day!

As you can see, Liverpool were by far and away the most successful club of the First Division era, and Manchester City’s runs to the title were so infrequent that they didn’t even make it onto the list.

Who Has Won More Trophies….Man City or Liverpool?

The generally accepted measure of success in football is trophies, so who has got more pots and pans in their trophy cabinet….Manchester City or Liverpool?

If it was a boxing match, the referee would have stopped it by now! Quite clearly, Liverpool are the more successful of the two teams.

Incidentally, how does the trophy count look if we only use the post-Sheikh years at Manchester City (2008-present)? The answer is a stonking 13-4 in City’s favour.

The moral of that story is perhaps one that English football fans don’t really want to read….