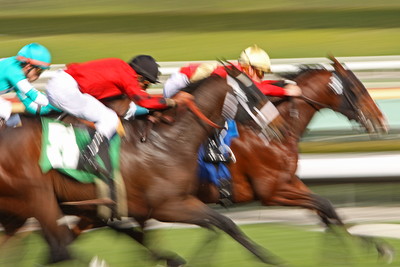 As you may already be aware, betting odds – be it in their fractional or decimal form – can easily be converted into a percentage, which offers punters an implied probability of an event occurring.

From 10/1 outsiders (9%) to 5/4 short-odds favourites (44.4%), these probabilities help many to better understand exactly the price they are taking and whether it is value or not.

So anyone backing the 1/16 cert Breakspear at Chepstow in August – giving him a 94% chance of winning – would have been feeling plenty of optimism as the horses took to the start line for the Lady Tracey Novice Stakes.

Unfortunately, horses can be unpredictable animals, and for all of the ultra-confidence of the betting market, things soon began to go wrong when Breakspear began to tread water in the final furlongs of the race.

Jockey David Egan reacted with blind panic, eagerly encouraging his mount on, but he had nothing in the tank to reel in the fast-finishing Painless Potter, who at odds of 11/2 had an implied probability of winning of 15.4%, for those interested.

“I know there was a long odds-on shot but I didn’t fancy him at all. I’m not sure he knows how to win yet.”

Mind you, you could barely him over the sound of bookmakers laughing all the way to the bank….

Incredibly, Breakspear isn’t the shortest odds favourite to get turned over on UK soil….far from it, in fact.

The award for the shortest-priced favourite to get beat goes to Royal Forest, whose defeat was made all the more galling by the fact that Sir Gordon Richards, one of the greatest jockeys in history, was in the saddle.

The race was the Clarence House Stakes at Ascot back in 1948, and this wasn’t the first time that Richards suffered the ignominy of a heavy odds-on loss – more on that shortly.

On this occasion, the horse in question was Royal Forest, who took his place in the field of four as a huge favourite with the bookies given his status as a potential Derby contender.

But it all went wrong on the day for the horse and Richards, and despite making all the running they were soon to be headed off by 33/1 hopeful Burpham.

Royal Forest went on to contest the Derby, once again ending up as the beaten favourite, but it’s his fateful day at Ascot that secures a place in the record books as the shortest-priced favourite to lose ever on British soil.

By conservative estimates, there were seven instances in which a horse priced 1/20 lost in UK racing between 1855 and 1912.

And that unwanted record has since been matched by three other horses – starting with Glendower back in 1947.

Yep, that man Richards was in the saddle, and like with Breakspear some 75 years later it was at Chepstow that this almighty underdog story would unfold.

To be fair to Richards, champion jockey on the Flat on a ridiculous 26 occasions, there was very little he could do as Glendower got spooked at the start line and threw his rider to the floor – leaving Markwell, the only other horse in the two-entry field, a free run to the line.

A couple of solid runners-up finishes at Nottingham and Newmarket saw Triple Dip installed as a 1/20 favourite in a weak field maiden stakes race at Lingfield Park next time out in March 2015.

Mark Johnstone’s charge was expected to run away with the Median Auction Maiden Fillies’ Stakes, but she never took to the artificial surface and Joe Fanning had a hell of a time trying to whip Triple Dip into shape.

In the end there was little he could do as Mercy Me, the 16/1 second favourite, asserted and held on to win by just over a length – condemning punters to one of the most sickening defeats of the modern era.

And they wouldn’t have known whether to laugh or cry when Triple Dip romped home in first place as an 11/4 shot less than a month later at Bath!

That record would not be matched until 2018, when Tree of Liberty was unable to succeed at the same price in a two-mile novice chase at Ludlow.

Only three horses took to the start, and it was Cap’N – on his debut over the larger fences – that prevailed as the 20/1 second favourite, with Tree of Liberty barely in the frame.

Trainer Kerry Lee said that her 1/20 favourite had been ‘beaten by a better horse’, which would no doubt have been some comfort to his backers….