The Ricoh Arena has proven to be anything but a home, sweet home for Coventry City FC and Wasps RFC.

Renamed the Coventry Building Society Arena for sponsorship purposes, both the former Premier League football side and the current Premiership rugby outfit have fallen into administration while playing their games at the venue.

Coventry City are, it seems, on the way back up following the best part of a decade in the doldrums, however things are going from bad to worse for Wasps.

They have been suspended from all English rugby competitions having entered administration due to their horrifying finances, and all of their players, coaches and support staff have been told they can find new clubs for free. Sadly, as many as 167 people have been made redundant, with Wasps automatically relegated into the Championship next season.

Wasps lost £175,000 a week for seven years (excluding one off items). You need someone with deep pockets or a very kind bank* to underwrite such poor cost control. Rugby authorities seemed to be blasé about the issue until too late.

*No such thing obvs pic.twitter.com/OqJ0nOqCyI

It has been suggested that Arena Coventry Limited, the company that owns and operates the Ricoh Arena, will avoid a similar fate with ‘strong interest’ by a number of potential investors – one of whom is thought to be Sports Direct founder and former Newcastle United owner Mike Ashley.

The owner of Coventry City FC, SISU, are not thought to be interested in buying back their club’s on-off home.

It would be churlish to blame the Ricoh Arena for its tenants’ financial woes, but has it been a factor in their respective demises?

For more than a century, Coventry City plied their trade at Highfield Road, a stadium in the city which gained national notoriety when it became England’s first all-seater football ground in 1981.

But the Sky Blues entered the new millennium as a Premier League team, and they had ambitious plans to build a new state-of-the-art 45,000 seat stadium in the city that featured a retractable roof, removable pitch and other such mod cons.

However, the project was doomed from the start. Wembley was chosen as the site for England’s new national stadium rather than the Coventry build, and that cost developers millions – as did Coventry City’s relegation from the Premier League at the end of the 2000/01 season.

When England’s bid to host the 2006 World Cup also failed, developers hastily re-drew their blueprints to turn Arena Coventry into a 32,000 capacity bowl, with Coventry City to be tenants rather than financiers – Arena Coventry Limited (ACL), a group owned by Coventry City Council and the Higgs Charity, paid for the construction work.

Further problems were hit when Jaguar, the luxury car firm indelibly linked to the city, were forced to pull out of a sponsorship deal that would have netted ACL £7 million a year. Instead, Ricoh filled the void at a rather more modest annual spend.

The Landlord from Hell

It didn’t take long for Coventry City’s big move to turn into a nightmare.

The club’s former owner, SISU Capital, had agreed a rental plan with ACL in which they would pay £1.2 million a year to play at the ground. But that deal did not include matchday revenue, and SISU believed they were entitled to a cut of that to pump back into the football club.

ACL, well, they begged to differ.

To make matters worse, SISU reneged on paying their rent, and legal action brought by ACL saw Coventry City forced into administration at the start of 2013.

They were effectively locked out of the Ricoh Arena by ACL, and were forced to play their home games at Northampton Town’s Sixfields Stadium – some 35 miles away.

Eventually, SISU and ACL came to an agreement after the capital firm paid the Ricoh Arena owners a £470,000 stipend, and Coventry City returned home in 2014 – a similar fallout in 2019 would see the Sky Blues move temporarily to Birmingham City’s St Andrews.

SISU would later be brought out by new owners Otium Entertainment Group, and as part of a charm offensive they signed a ten-year lease to return Coventry City to the Ricoh – now known as the Coventry Building Society Arena – for the 2021/22 season.

While all this drama was playing out, rugby union outfit Wasps had revealed their plans to leave their ground-share with Wycombe Wanderers, and the plot thickened when they acquired a majority shareholding in ACL back in 2014 – effectively becoming owners.

Unsurprisingly, Wasps were criticised for the move by their London-based supporters, and attendances at the Coventry venue were sparse at best….the bond loan taken out to finance the relocation, and a subsequent lack of matchday revenue, are considered two of the key reasons why Wasps are now on the brink of annihilation.

Be Careful What You Wish For 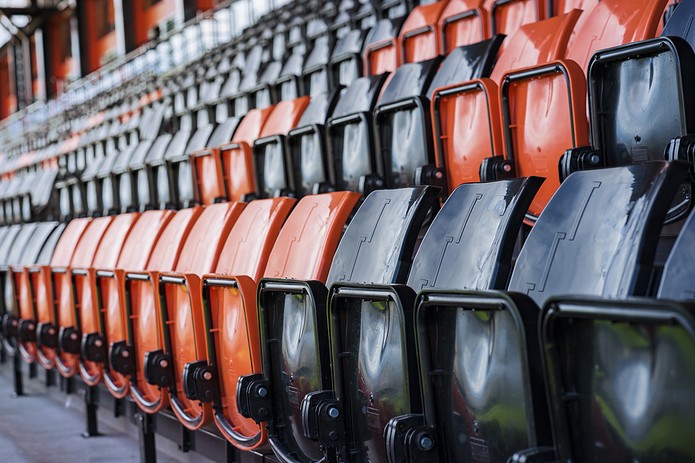 A new stadium should represent a bright new beginning for a sports club.

But sometimes such moves can lead to disaster, and Darlington FC are an example of being careful what you wish for.

George Reynolds was the ambitious millionaire who brought the club in 1999, stating his belief that he could take the Quakers all the way to the Premier League.

Part of his blueprint for a successful future was to build a 25,000 all-seater venue, and this was readied in 2003 to the cost of £18 million – and name, you guessed it, the Reynolds Arena.

The truth is that Darlington were never going to fill such a huge venue given their lower league status, and the stadium – financed by high interest loans – became an almighty albatross around their neck.

And then George Reynolds was arrested. He was pulled over in his car, and a police inspection found a mind-boggling £500,000 in cash in the boot. Reynolds was later charged with money laundering and tax evasion, and sent to jail for three years.

Darlington FC was plunged into administration, and while they survived that in 2004 they would eventually be wound up in the High Court eight years later. The Darlington Arena, meanwhile, lost its Reynolds name and was sold to local rugby union side Darlington Mowden Park, whose attendances are around the 1,000 mark.

It’s not just lower league clubs in peril from financing a new stadium. Everton have been losing money left, right and centre in recent years, and yet their new Bramley-Moore Dock stadium will cost them an estimated £500 million….it will be interesting to see how that situation pans out in the years to come.

Previous Post: « What Is F1’s Budget Cap and Should Max Verstappen Be Stripped of 2021 Title?
Next Post: In the Dock: Could Everton’s New Stadium Bankrupt Them? »