It was billed as a relegation six-pointer.

But the January 21, 2023 meeting between West Ham and Everton had also been rather cruelly dubbed ‘El Sackico’, with both Hammers boss David Moyes and Toffees manager Frank Lampard both under intense scrutiny given the plight of their respective sides.

West Ham would win 2-0 in the end, and while at the time of writing Lampard hadn’t been given the boot, it has been widely reported that it’s likely to happen imminently.

Despite the former Chelsea and England legend’s assertions to the contrary, his job is in obvious jeopardy for one simple reason: Everton need the ‘new manager bounce’, the perceived improvement that comes with a new appointment, in order to preserve their to-now unbroken status as one of just six clubs that have never been relegated from the Premier League.

But is the new manager bounce simply a made-up phenomenon, based on occasional examples of success, or is there a genuine case to be made for sacking a previous boss in order to power a subsequent improvement with a new boss in the dugout? 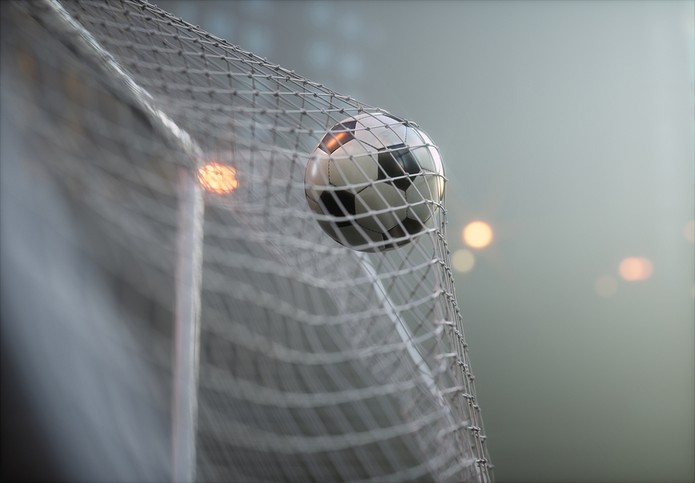 It’s long been believed in football that a new manager has an ability to bring about an immediate improvement in fortunes.

Why? Maybe it’s because the players get a fresh start and a clean slate, perhaps it’s a change in tactics or possibly it’s simply because the replacement is a better man-manager or tactician than their predecessor.

In the 2020/21 Premier League season, there was a surprisingly low turnover of managers – just four of the twenty clubs sacked their boss and replaced them during the campaign.

And yet each sacking proved to be the right decision as far as the results thereafter are concerned. Here’s a look at the points-per-game tally of the incumbent, and that of their successor:

This is only a small sample of four, of course, and so it would be illogical to draw too many conclusions from it. But the Premier League have done their own research, and between the start of the 2017/18 season and November 2021, the new manager won more points-per-game than their predecessor (in their opening five matches) in 20 out of 26 cases.

So a picture has already been painted as to how sacking a manager can – in the short term at least – be a smart move. But for how long does the new manager bounce actually last?

Let’s go back to the start of the 2020/21 Premier League season, and chart the progress of all new managerial appointments in the span.

Were they successful just for that honeymoon period of their opening six games in charge, or did the good times continue to roll past the ten and fifteen game marks? 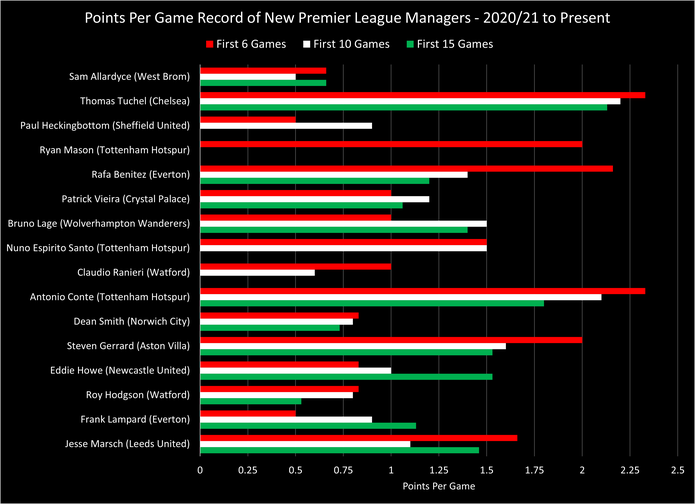 The chart confirms that the new manager bounce is definitely a ‘thing’, for the most part, with seven of the twelve managers that completed 15 games in charge having a better PPG after six games than fifteen.

Others took time to get their new team playing, while the likes of Eddie Howe were employed just before the transfer window – he benefitted from spending the ‘Saudi bucks’ at Newcastle United, which was a perk not afforded to predecessor Steve Bruce.

It’s clear too that those appointed during the season enjoy a greater new manager bounce that those handed the managerial reigns before the off (Rafa Benitez, Patrick Viera, Bruno Lage & Nuno Espirito Santo) , which we probably would have predicted anyway.

There’s some caveats, too. The quirks of the fixture list will determine how a new manager performs in their job, and also what the points-per-game expectations should be. Many decision-makers decide to sack their managers during an international or FA Cup break, giving their new boss more time to work with their players on the training ground. But that doesn’t take into consideration the difficulty of the fixtures ahead.

The takeaway points? If you are a club fighting relegation, perhaps wait until there’s ten games to go before making a sacking – that way, you can maximise your new gaffer’s honeymoon period.

And when your club’s new boss does enjoy immediate success, don’t be too hasty in proclaiming them as something of a messiah. A dip in form is usually just around the corner….

Previous Post: « Who Is the Greatest Football Manager of All Time?
Next Post: What Is a White Card In Football? »