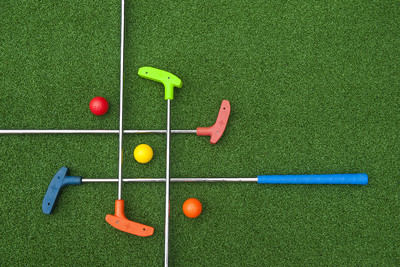 Under the windmill and into the clown’s mouth.

We’ve all been there: out on the crazy golf course on holiday or at a British seaside town with hopes of unleashing our inner Tiger Woods. Only for mum to drain a monster 50ft putt through the lighthouse to claim the spoils.

For most, crazy golf is knockabout holiday fun. For some, it is serious business. And it is getting even more serious….

In the same week as the US Open at Pebble Beach, in which messrs Woods, McIlroy, Johnson and Koepka looked to win another major trophy and claim the $2.25 million first prize, there was golfing action of an altogether different kind at Hastings Adventure Golf Complex which to those involved is of the upmost importance.

The World Crazy Golf Championships took place at that well-known sporting cathedral, with more than 100 players battling it out for the £1,000 top prize and the chance to be named the best crazy golfer on the planet.

As you can imagine, the atmosphere at the tournament in the seaside town is a little bit more laidback than it is on the Californian coast, but all involved are completely serious about getting their hands on the trophy.

The course at Hastings is designed by none other than Arnold Palmer, the seven-time major winner. It features all of the usual standards of a crazy golf course as far as obstacles are concerned, but these have been laid out to far more complex specifications than the track you might bash your way away around at Skegness etc.

And like the lucrative PGA Tour, which attracts the best talents around, all of the action is overseen by the British Minigolf Association. This is the official governing body of the sport in the UK, who put together a calendar of tournaments for all to try their hand at.

Anyone can enter too, so maybe now is the time to start hitting the felt in preparation for the World Championships in 2020.

The History of (Crazy) Golf

As is not all that uncommon in sport, crazy golf was kind of invented by accident.

Back in the 1860s, it was frowned upon for ladies to play golf alongside the men at many mainstream courses – as is still the case in some parts today, unbelievably.

And so ‘putting clubs’ were set-up on smaller courses away from the main action where women could play; the first was thought to be at St Andrews, the home of golf, where the crazy golf course is now known as the Himalayas thanks to its changes in height.

In the first half of the 1900s, crazy golf was considered very much a leisure pastime, with specialist courses built across mainland Europe and also in Sweden, the spiritual home of the sport.

The Swedes started taking their crazy golf more seriously in the 1930s, when the Swedish Minigolf Federation was founded. The National Championships have been played in the country ever year since 1939.

Tournament play was taken to a whole new level in the USA, where prize funds in excess of $10,000 (and remember, this was around 80 years ago) were offered to the players. One of the most famous events was the National Tom Thumb Open, which was played at Lookout Mountain with more than 200 players battling it out for the $2,000 top prize.

Today crazy golf is governed on a global level by the World Minigolf Sport Federation, while in the UK the growth of the game is hampered somewhat by a bizarre ruling.

Most crazy golf authorities receive funding from their central government, but in England the whole process is thrown into chaos because Sport England, the national body, does not see traditional golf and minigolf as separate entities. With only one funding stream available, that goes to standard golf – with the miniaturised version left in the dark.

So You Want to Be a Crazy Golfer? 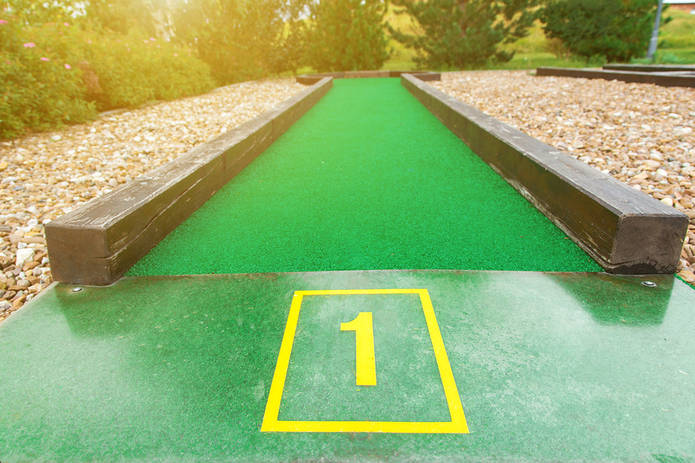 You might think that a round of crazy golf is just a bit of fun, but those involved competitively leave no stone unturned in their pursuit of glory. Many carry around notebooks with them, like a caddie has a yardages book in traditional golf, with notes on hole layout and where exactly to strike the ball.

There’s tactics to think about, too. Some players keep their ball warm in a sock between holes. The theory is that an even temperature helps it to roll at a consistent speed – crazy golf’s own ‘conker in the vinegar’ trick.

Some players even have a sort of caddie that accompanies them to events, holding umbrellas over them to prevent their ball heating up too much in the sun. These assistants are also faced with the daunting task of blocking out any shadows that might appear on the hole.

There’s also the dress code to think. “The most important thing is comfortable shoes. It is amazing how many miles you can clock up,” says Martin Greenhead, who represents England and who was third with a day to go in the World Championships. “Then you need protection from the sun and, as it is England, we all have a full set of waterproofs.”

If you want to become a leading crazy golfer, you’ll need to splash out on a specialist putter as well. Unlike those you might find at the Callaway factory, these have rubber heads and are weighted at the bottom; the science is that this keeps the club low to the ground, and produces a sweeter, cleaner strike of the ball.

And speaking of the ball, just an ordinary Titleist golf ball won’t cut the mustard. These don’t bounce all that well, and are considered something of a safety hazard when hurtling into obstacles and flying off at random angles.

So specialist balls are imported from mainland Europe. These are smaller in size and slightly softer too, which allows them to be expertly ricocheted around the course. They vary in size and weight, and can be fully customised with the player’s own unique designs.

The Battle of Hastings

The World Championship action gets underway on the Friday, when the players are allowed onto the Hastings Adventure Golf layout for the first time to get a feel for the course.

Although based on the same Arnold Palmer build as the legend originally designed, the obstacles are moved and some hazards added, including bunkers and water features. Bridges and cliffs are also used to heighten the difficulty and add to the aesthetic appeal of the layout.

The players are also handed a set of the official World Championship balls, which are standard-issue for all players and kept under lock-and-key until the tournament comes around.

In the end, the 2019 edition was won by Marc Champion, whose score of 29 in the sixth round was the lowest of the weekend. His winning score was -17, two clear of Adam Kelly in second.

Previous Post: « Galileo Sires Fourth Epsom Derby Winner in 2019 with 12 of the 13 Runners Descendants of the Irish Stallion
Next Post: The Best Starting XI in Women’s Football: Could this Line-Up be Beaten? »