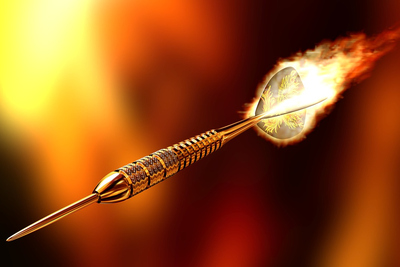 The 2019 edition of the PDC World Darts Championship marks the 25th anniversary of the breakaway event.

It’s beer, it’s fancy dress and it’s some top tungsten action; the early rounds are the perfect pre-cursor to Christmas, and the business end a fantastic way to ring in the new year.

It’s not always been plain sailing for the event, however. The early editions were awash with political issues following the PDC’s split from the BDO, but as things stand today we have the best 92 darts players on the planet entertaining 3,000 fans in each and every session of play.

It’s a tournament that has produced some of the sport’s most iconic moments through the years, and ensured that Phil ‘the Power’ Taylor would go down as one of the finest English sportsmen in history. After all, 16-time world champions are few and far between.

So let’s take a look at the history of this fantastic event, and recap on some of the most brilliant and downright bizarre moments in the PDC World Darts Championship archives.

The world of darts was in absolute turmoil back in 1992.

At the time, the British Darts Organisation (BDO) was the game’s only governing body, but with TV coverage at a low and new sponsors not forthcoming to pump revenue into the sport, the players – well, some of them at least – had had enough.

And so 16 of them – including all of the previous BDO world champions still playing the sport, decided to set up their own organisation, the World Darts Council (WDC).

They were invited to play in the BDO World Championship in 1993, but angered organisers by wearing WDC branding on their shirts. They were never invited back.

The WDC set about creating their own platform to play and the divide with the BDO widened, and it’s a split that still exists to this day.

Fourteen of the original sixteen defectors played in the inaugural WDC World Championships in 1994, with the field brought up to 24 with players from all over the world joining the fold.

The likes of Taylor, Dennis Priestley, John Lowe, Eric Bristow and Bob Anderson all took part at the Circus Tavern in Purfleet, with the event sponsored by classic lager brand Skol and the winner pocketing some £16,000.

And that would be Priestley, who demolished Taylor 6-1 in the final to become the WDC’s first ever world champion.

Super Eight for Taylor in Era of Dominance

Whoever engraved the World Championship trophy had an easy time of things between 1995-2002.

He or she could carve the name ‘Phil Taylor’ with little though whatsoever, as the Power put his stamp on the brand that would become known as the PDC in all-conquering fashion.

A magnificent eight consecutive world titles followed, four of which featured final defeats of his old rival Priestley, as the event saw significant improvements which included an increase in the prize winner’s cheque to £33,000.

The first three of those were WDC titles, with the 1997 renewal being significant: Taylor beat his mentor Bristow in the semi-final, before becoming the first player in history to compile a 100 average in a World Championship final when he downed Priestley 6-3.

Prior to the 1998 tournament, there was another huge sea-change forthcoming.

The WDC and the BDO went to court in the summer of ’97, with various legal ramifications seeing the WDC change its name to the Professional Darts Corporation. It was also agreed that if a player had entered the previous year’s BDO worlds, they couldn’t play in the PDC version the next year.

The change made no difference to Taylor, who whitewashed Priestley in the final with a staggering average of 103 to prove he was by far and away the best in the world.

The 1999 edition saw a change in format to a flat draw of 32 players, with early tournament appearances from Peter Manley and John Part, more on him later.

There were further wins in ‘99 and 2000 for Taylor, and the Power followed up in 2001 with a 7-0 demolition of Part. It was an edition which saw the last World Championship appearance from Bristow and the first from a woman – Gayl King – who went down 1-3 to Graeme Stoddart in the first round.

The Stoke thrower’s super eight was completed in 2002 when he crushed Manley 7-0 in the final, having earlier recorded one of the highest averages in televised history – 111.21 – against Shayne Burgess in the second round.

A New World Order Turns the Power Off

While Taylor’s dominance of darts didn’t exactly come to an end – he won another three consecutive world titles between 2004 and 2006, there were some new faces on the scene that would cause him great consternation.

The Canadian, John Part, had tasted the bitterness of a tonking at the hands of a world final to Taylor back in 2001, and that must have served as fuel for ‘Darth Maple’ to return and make amends.

With the Power in a ninth straight final and on a run of 44 straight wins at the Circus Tavern, the bookmakers gave Part little hope of a upset.

But he produced a superb performance to stun Taylor and the onlooking crowd in a last-set decider, and in doing so claimed a second world title having won the BDO’s version back in 1994.

Part would repeat the dose in 2008, beating Kirk Shepherd in the final. Shepherd was a 1000/1 shot with the bookies at the start of the tournament, but the previously unheralded of ‘Martial Dartist’ beat the likes of Terry Jenkins, Peter Manley and Wayne Mardle to reach the unlikeliest of finals.

There was another new name on the trophy, too. Just a year after competing in the BDO world final, Raymond van Barneveld revoked a unique clause in his contract which allowed him to switch to the PDC immediately after, and his first season with the big boys culminated in a first PDC Worlds in which he was seeded 32.

Barney knocked the number one seed, Colin Lloyd, out in the second round, before whitewashing Rico Vonck, Alan Tabern and Andy Jenkins in his next three matches.

That set up a mouth-watering final against Taylor in what would be the last match ever played at the Circus Tavern….and it proved to be a classic.

A contest that would later be described by Taylor as the best he ever played in, Barney came from three sets down to force a final-set shootout, and after they couldn’t be separated there a final all-or-nothing leg was played.

The Dutchman held his nerve to clinch a first PDC world title and start a rivalry with the Power that would last another decade.

Darting Royalty at the Palace

The World Championships waved goodbye to the Circus Tavern and said hello to Alexandra Palace in 2008, the grand old venue that remains the host to this day.

Taylor had his revenge on Van Barneveld in the 2009 final, averaging an obscene 110.94 in a 7-1 win, and the Power bagged a 15th world title a year later by defeating Simon Whitlock 7-3.

And then another Stoke tungsten tosser hit the jackpot.

Adrian Lewis, a protégé of Taylor’s, was a promising young talent yet to win a PDC major, but he powered through the field in the 2010 Worlds to set up a final with another talented hopeful, one Gary Anderson.

It was Lewis who took the spoils 7-5, and 12 months later he added a second world crown when defeating Andy Hamilton in the final.

That 2011 tournament featured the infamous ‘windgate’ semi-final against James Wade, in which Lewis – who was 0-5 down at the time – complained of a draft blowing across the stage. The players went off, the problem was sorted….and Lewis produced a remarkable comeback to win 6-5.

Mighty Mike and a Flying Scotsman

Michael van Gerwen was a brash young Dutchman with some big darts and even bigger celebrations, which caused his opponents to often take umbrage with the self-styled ‘Mighty Mike’.

A run to the final brought together the old and the new, with MVG tackling Taylor in front of an enraptured crowd. Was this going to be a ceremonial passing of the torch?

Not a bit of it, as the Power left the young Dutchman in tears following a 7-4 defeat. It would be Taylor’s final world title, and the beginning of a new era of dominance in world darts.

Van Gerwen would follow up by winning the big one, as well as pretty much every other trophy going, in a two-year spell of dominance that exceeded even the Power’s exclusivity with the sport’s silverware.

But then along came the Flying Scotsman.

Gary Anderson had been one of the sport’s smoothest throwers for the past decade, but his trophy cabinet did not evidence as such.

But the Scot won the Players Championship in the winter of 2014, and that proved to be the spark as he claimed his first world title early in 2015, beating Taylor in a last set decider.

Anderson followed up by claiming another just 12 months later, beating Lewis 7-5 in a high-quality contest.

And then MVG ended a three-year wait for a second world title by eclipsing Anderson with a 107 average. That was the start of their outstanding rivalry that is still as fierce as ever.

Taylor, Lewis, Anderson, Van Gerwen….they had all served their apprenticeship at darts’ coalface.

Rob Cross, well, he went about things a bit differently.

He didn’t even turn professional until January 2017, but after a solid year he went into the 2018 World Championships as a dangerous 20th seed.

He defeated Seigo Asada, Michael Smith and John Henderson, before winning a mini-epic against Dimitri van den Bergh in the quarter-finals.

Cross went to the well in the last four, playing his part in one of the best matches ever seen at the Alexandra Palace against MVG. Incredibly, it was the former electrician who got home after the Dutchman missed a catalogue of darts at double.

The scene was set, then. Cross, the darting apprentice, would take on the master, Phil Taylor, in his final match in darts. The curtain would fall on Taylor’s career in the most fairytale of endings, wouldn’t it?

Nope. Cross bullied the 16-time world champion, winning 7-2 and barely breaking a sweat. For Taylor, it was the end of a stellar career that will never be matched. For Cross, perhaps it’s just the beginning.