Another year of the Isle of Man TT, another tragedy.

Mark Purslow, a 29-year-old rider from Wales, was involved in a crash that would ultimately cost him his life on the first Wednesday of the meeting.

The experienced Welshman had competed in the TT races before, and his death came just hours after another rider, Dave Moffitt, was airlifted to hospital following a separate incident. His condition was described as ‘serious but stable’.

“The Isle of Man TT Races are deeply saddened by the passing of Mark Purslow following an incident in this evening’s qualifying session for the 2022 Isle of Man TT Races,” a statement from officials read. “We would like to extend our deepest condolences to Mark’s family, loved ones, and friends.

“The TT Races will continue – but always with Mark in mind.”

We are deeply saddened to announce the passing of Mark Purslow following an incident in this evening’s qualifying session.

All our thoughts are with his family, friends and loved ones. pic.twitter.com/O4ZFg16WOo

This latest fatality will of course leave many questioning the future of the Isle of Man TT, with more than 275 deaths – including riders, race officials and spectators – recorded since the 1930s.

So is the TT simply too dangerous to continue?

What is the Isle of Man TT?

The Isle of Man Tourist Trophy, or TT as it has been shortened to over the years, pits motorcycle riders from all over the world against one another on the infamous Mountain Circuit track.

They compete in a range of different classifications, including senior, junior and lightweight TT races as well as superbike, superstock and even sidecar competitions.

First held in 1907, the TT has been contested every year since bar from a total nine-year stoppage for the first and second world wars, but it quickly became apparent that there was plenty of risk attached to competing – 28 rider deaths were recorded up until 1950 alone, as well as two fatalities of innocent bystanders in 1939.

Despite those concerns, the Mountain Course was selected to host the British round of the World Moto GP between 1949 and 1976 – a period during which 80 more riders would tragically lose their lives.

The risks saw many leading riders and manufacturers boycott the British Moto GP during that time, and those commercial pressures saw the Isle of Man replaced as host in 1977 – although the TT has remained an annual fixture on the biking scene ever since.

Sadly, the death toll has continued to rise over the years, and at the time of writing it stands at 276 – 261 of which are from incidents involving riders, and the other 15 race officials, spectators and bystanders.

Officials are continually trying to improve safety at the event, and ahead of the 2022 TT a raft of changes were made in order to increase the number of marshals on site, enhance accident response and attempt to uphold more robust safety standards.

But only time will tell how much of a difference, if any, those will make.

Should the Isle of Man TT Be Banned? 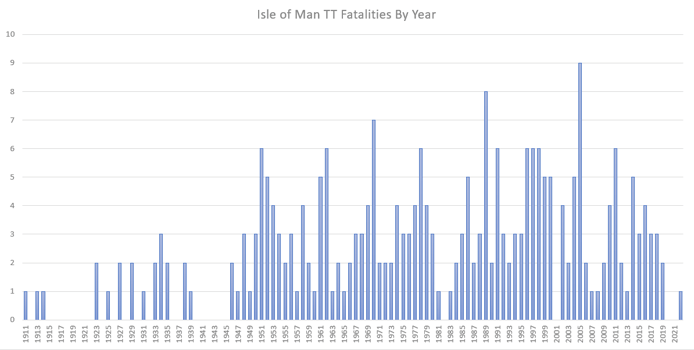 Have you ever parked up in a car park and read a sign that says ‘vehicles are left at the owner’s risk’?

That’s essentially the same rules that apply for the Isle of Man TT – riders, spectators and officials know the risks and the high fatality rate at the meeting, but they also know that at an event that hosts more than 46,000 people the probability of them being involved in an accident is relatively low.

If you take people’s freedom of choice away from them, you could argue that our democratic principles are cast aside.

The festival of racing contributes millions of pounds to the Manx economy each year, and is one of the reasons why the local government is so keen for the event to continue.

But this is a meeting that has earned the phrase ‘the most dangerous race in the world’ for all the wrong reasons, and despite the efforts of organisers you wonder how they can truly make the TT safer given the incredible speeds and sharp turns that the public roads of the Mountain Course cater for.

And that appears to be part of the thrill for those that sign up to race. Peter Hickman, a TT veteran, has said of the track: “You race through villages, woodland, over a mountain, big open areas, tight twisty bits, unbelievably fast bits. I’ve done extreme sports, but I cannot find anything that comes even close.”

Some have queried whether a reduction in the power of bikes allowed to compete would help – the current rules allow for up to 190 horsepower machines to be entered, which is a higher HP than found in slick cars like the Honda Civic.

That said, since 1937 there has been at least one death at the festival every year bar 1982. So anybody interested in competing in or attending the Isle of Man TT truly does so at their own peril.

Previous Post: « Sport Behind Closed Doors: How Chess Led the Way in Banishing the Crowds
Next Post: Golf’s Most Bizarre Reasons for Disqualification: From Tipp-Ex to Towels and Tantrums »