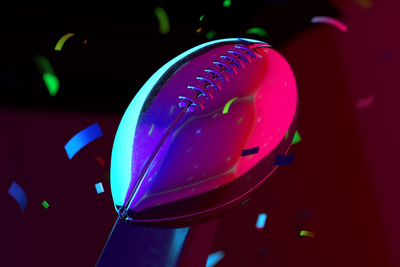 Everyone loves a good comeback story….unless your team is on the receiving end, of course.

The Super Bowl has served up some legendary comeback victories over the years, and incredibly 28 of the last 53 champions have been trailing at some point in the game before coming back to seize the win.

The latest edition to that rollcall came at Super Bowl LIV, where the Kansas City Chiefs – propelled forward by a stunning quarterback performance from Patrick Mahomes – overcame a ten-point deficit to win their first Super Bowl in 50 years.

Most impressive was that the Chiefs were 10-20 down heading into the final quarter, where most expected the San Francisco 49’ers to complete an easy shutout win.

Mahomes and co had other ideas, however, and ran in 21 unanswered points in an inspired spell of scoring that lasted just shy of five minutes.

The last time the Chiefs won the Super Bowl, the Beatles were still the biggest band in the world and Richard Nixon was the US president, and the current crop of KC players showed their incredible powers of recovery in a miraculous victory.

But how does their win compare to the other greatest Super Bowl comeback victories of all time? 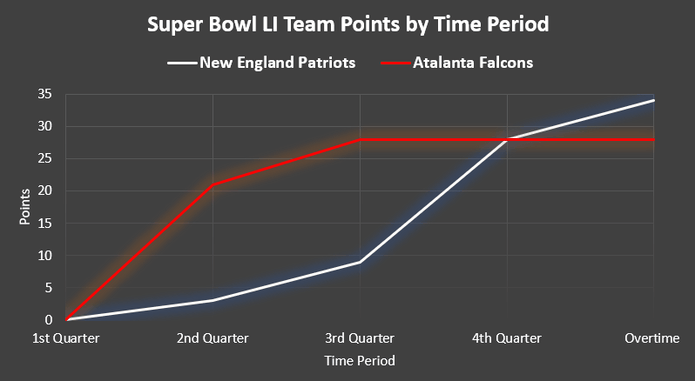 The biggest comeback win in Super Bowl history came as recently as 2017, when Tom Brady’s New England Patriots picked themselves up off the canvas to overcome a staggering 25-point deficit against the shellshocked Atlanta Falcons.

This was arguably the game in which Brady cemented his status as the greatest quarterback in NFL history – an accolade that Mahomes himself may one day claim.

The Patriots found themselves 3-28 down with just six minutes left in the third quarter, and that left the sportsbooks with no choice but to make them a 100/1 chance in-running. Any punter with the foresight – or maniacal streak – to back Brady and co were to enjoy the ultimate reward.

Danny Amendola started the recovery train with a touchdown on the 4th down from a Brady pass, and four more scoring turns deep into the fourth quarter would send the contest into overtime.

That man Brady came into his element in OT, connecting five majestic passes before James White was given the easiest of tasks with a two-metre cross into the end zone.

That gave Brady his fifth ring, and completed the greatest comeback in Super Bowl history. 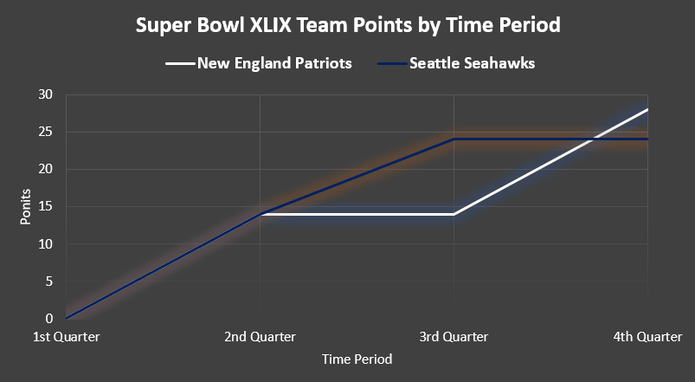 The Patriots had shown their comeback credentials just two years prior, where this time they would overturn the Seahawks’ early dominance to confirm another remarkable win on the big stage.

When Doug Baldwin touched down to give the Seattle outfit a 24-14 lead heading into the fourth quarter, the game appeared to be up for Brady and his New England teammates.

The Seahawks were considered to have one of the best defensive rosters around – the almost-mythical ‘Legion of Boom’, but they had no answer to the precision passing of Brady: like he would two years later, the legendary QB hit Amendola with a pass to reduce the deficit.

And the best was yet to come: an incredible pass put Julian Edelman clear, and he made no mistake to send the New England faithful into rhapsody.

Ironically, the Seahawks would still have one last chance to win it after driving their way down to the Patriots’ end zone, but Malcolm Butler intercepted Russell Wilson’s all-or-nothing pass to spark wild scenes on the touchline. 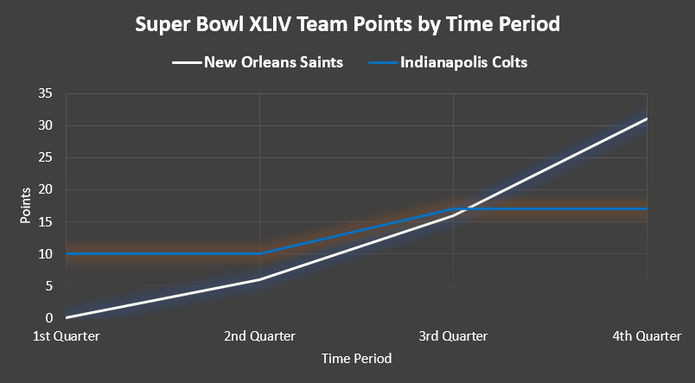 The Super Bowl has a habit of giving the best quarterbacks in the business a chance to shine, and Super Bowl XLIV was the time of Drew Brees and not Peyton Manning, as most expected.

The Indianapolis Colts romped into a 10-0 lead courtesy of Manning’s brilliance, but not to be outdone by his opposite number Brees would soon have his say on the destination of the Vince Lombardi trophy.

The Saints ran in 13 unanswered points to take the lead, and what followed was a titanic, topsy-turvy contest that still ranks as one of the most outstanding Super Bowl games in history.

The scoreline went from 13-10 to the Saints to 13-17 to the Colts and back to 24-17 to the Saints, with Brees eventually steering the ship home by a 14-point margin to cap the joint second-biggest comeback in Super Bowl history. 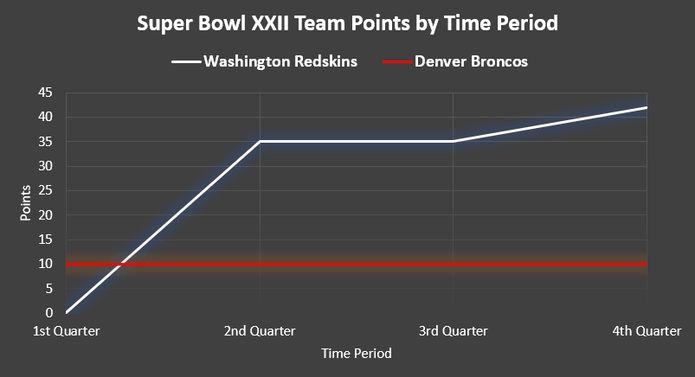 You can’t ask for much from a first quarter of a Super Bowl game. The Broncos were 0-10 up and absolutely cruising, and with John Elway in fine fettle they looked set to extend their lead after the break.

But a horror-show performance from the quarterback allowed the Redskins back into the game, and growing stronger with every Broncos mistake they ran in 35 unanswered points in one of the most destructive quarters in Super Bowl history.

Elway couldn’t recover, an the subsequent 32-point margin of victory for Washington remains one of the most comprehensive in the history of the big ball game. 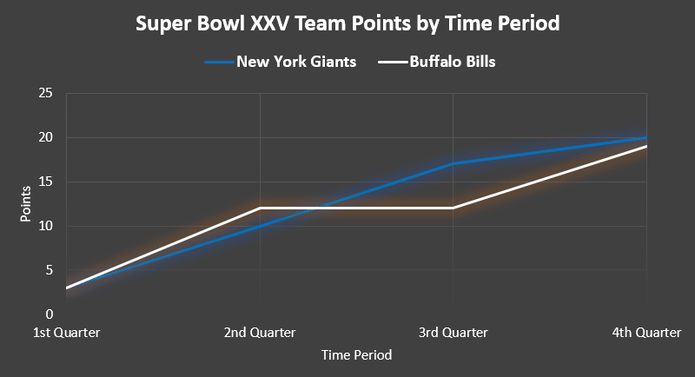 This was the Super Bowl famous for the last gasp kick at the posts from the Bills that sailed just wide.

But the scene had been set a long time ago when the Buffalo side were comfortably ahead by 3-12, and the feelings of despair passing through the Giants camp was highlighted by their QB Jeff Hostetler getting sacked inside his own end zone.

The New York franchise rallied, however, and found a way back into the game with a touchdown just before half-time.

An attritional third and fourth quarter saw the Giants edge ahead 20-19, before the Bills’ Scott Norwood would deliver the kick at goal that would go down in legend as it curled away and brought misery from what appeared to be glory. This was the first of four consecutive Bowl defeats for the Buffalo boys.