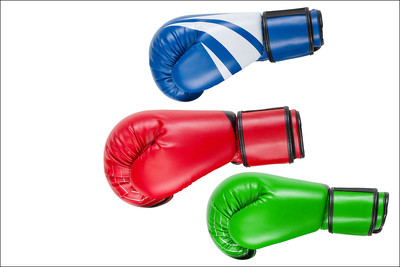 Not every trilogy is welcome, as anybody who watched The Matrix Revolutions can testify.

Often, there’s good ground for a trilogy when the first two ‘products’ in a series are so enjoyed, and that’s why in boxing these triple-headed delights usually come after an edge-of-the-seat first fight is followed by a titanic tear-up in the rematch.

With Tyson Fury vs Deontay Wilder, you do have to question the sense of the trilogy being completed.

The first meeting between the giant duo was a slobberknocker, and a split decision draw is fertile ground for a rematch.

But in the second contest, Fury – coming in bigger, stronger and with a knockout specialist trainer in Sugarhill Stewart – absolutely demolished Wilder in the most one-sided rematch you are ever likely to see, with the American doing well to last until the seventh round.

That set up a mouth-watering all-British, unification clash between the Gypsy King ad Anthony Joshua, which would be the first time that two domestic heavyweights collided for all the belts.

Well, that was the plan, anyway. It has now been confirmed that Wilder has enacted his rematch clause, meaning that the third fight in the trilogy will have to take place this year – unless Fury’s camp can find a way to pay-off the Bronze Bomber, of course.

It’s a shame that Fury v Joshua looks set to be delayed once more, but as we’ve seen in the past these boxing trilogies can produce epic third fights that are simply unmissable.

If Wilder can up his game then who knows: maybe he and Fury will join this masterclass in the art of the boxing trilogy:

Sugar Ray was the super-cool Olympic gold medallist who took to the pro ranks with aplomb, winning 27 fights in a row and eventually going on to be a world champion in five different weight divisions.

In stark contrast, Roberto Duran was a rock-hard Panamanian who was nicknamed ‘Hands of Stone’ and who made his debut in 1968 – his last outing came in 2001!

Duran was in his prime when he meat Sugar Ray for the first time, and to the astonishment of many he ended the Olympian’s unbeaten streak with ‘The Brawl in Montreal’ – apparently he was fired up by the fact he got only a fifth of the purse of Leonard despite pre-dating him in the fight game.

Sugar Ray, with pride wounded, knew the only way he could retrieve the situation was in a rematch, and the two locked horns little over a year later.

This time, he used his noted amateur prowess to out-box Duran, getting in and then out with a series of stinging combinations. Such was the beating that in the eight round the Panamanian turned his back on Leonard and told the referee ‘no mas’, which translates as ‘no more.’

The victory was so comprehensive that the trilogy fight came as something of a surprise, and sadly it came nine years later when both men – having each retired – made comebacks to duke it out once more.

Leonard once again relied upon his superior technique in a bout that could not live up to the excitement of the first two meetings.

Some boxing fans love the technical aspect of the sport, while others enjoy nothing more than a toe-to-toe, all-out-war.

The Gatti vs Ward trilogy fits neatly into the latter category, pitting two absolute warriors against one another on three separate occasions.

Gatti would go on to become the WBC super lightweight champion – he could box as well as brawl, but at this point in his career he was just on the fringes of the world title scene.

Ward, meanwhile, was an Irish-American who while not considered among the elite, was generally an excellent litmus test for any fighter with golden aspirations.

They met first up in Connecticut in May 2002, and a battle for the ages ensued. A ninth round knockdown from Ward was enough to secure a majority decision, but the victory must have felt rather hollow given that both spent considerable time on a trauma ward after the fight.

The bloodlust of the American public inspired a rematch, which duly came in November of that year in New Jersey, and this time it Gatti who claimed a points win following a knockdown of his own. This was a worthy follow-up to their Ring Magazine ‘Fight of the Year’.

With the scores locked at one-apiece, a trilogy fight naturally followed. And, again, this was a war for the ages – another Fight of the Year winner in 2003. Gatti, surviving an early knockdown, got up off the canvas to secure another points victory, and both spent time in hospital after the contest. Ward would never fight again, but his legacy was secured.

An outstanding fighter who won world titles in four different weight divisions, Erik Morales will always be fondly remembered by fight fans for not one but two incredible trilogies.

His back-and-forth tussles with Manny Pacquiao pitted two of the great super featherweights against one another in a rivalry that was simply all about the boxing – the Filipino winning the mini-series 2-1.

But from an entertainment perspective, it was the three fights with Marco Antonio Barrera that ensured Morales of his status as a hall-of-fame boxer.

The first contest, which took place in the year 2000, saw the two Mexicans lock horns in Las Vegas, and a fantastic back-and-forth encounter was eventually settled by a split decision win for Morales – a outcome that many disputed. It was a multiple ‘fight of the year’ award winner.

The necessary rematch was an equally pulsating affair, and this time it was Barrera who was on the end of a generous points win in the eyes of many having been dropped by a body shot in the third round.

A third fight was essential then, and while occasionally trilogies come to a limp end with the first two contests taking everything out of the pugilists, the opposite was true here.

They threw the kitchen sink at each other, with Barrera on top in the opening half of the fight before Morales showed incredible courage to rally in the second.

One judge scored it a draw, but the other two gave Barrera a one-point win and that was enough for him to get the decision. Again, the duo won The Ring magazine’s ‘Fight of the Year’ honour.

Jake LaMotta was the real-life inspiration for Robert De Niro in the film Raging Bull, and he became known as having one of the best chins in boxing history.

He actually fought Sugar Ray Robinson six times in all in an era of boxing where people just fought for the love of the game, but it was the trilogy that took place between 1942 and 1943 – yes, they fought each other three times in barely six months – that best showcased their talents.

Robinson was then the unbeaten heavyweight and widely considered the best pound-for-pound boxer on the planet, while LaMotta was popular for his come forward and ‘hit or be hit’ style.

He knocked Sugar Ray down in the first round of their maiden encounter, and an almighty shock appeared to be on the cards until Robinson righted himself and ground out a points victory.

The rematch took place four months later, and this time LaMotta would have his moment: aided by the iconic image of him bludgeoning Robinson through the ropes and into the crowd, he would land a unanimous points victory.

When we’re talking about three fights of incredible skill, power and heart, it’s hard to overlook Muhammad Ali vs Joe Frazier as being at the top of the tree.

There was a legitimate desire to see the heavyweight duo going at it, especially after their first bout in 1971 was named the ‘fight of the century’.

Ali had done the unthinkable: having four years out of the sport having consciously opposed the Vietnam War, he returned to the ring and immediately the man many felt to be one of the greatest heavyweights of all time.

The trash talking was the stuff of legend, but in the end Ali’s ring rust showed and he lost their first encounter by unanimous decision via the scorecards.

Fight fans wold have to wait another three years for the rematch, but when it eventually came around it did not disappoint.

Once again the pair could barely be separated, but this time it was Ali who won on points to square their rivalry up at one triumph apiece.

That set up the man formerly known as Cassius Clay rather nicely, as he went on to contest the Rumble in the Jungle with George Foreman, regaining his world heavyweight crown in a fight that became famous for his ‘rope-a-dope’ tactics.

A few standard title defences followed before the scene was set for the Thrilla in Manila, the third and final bout with Joe Frazier.

Watched by a staggering worldwide audience of one billion, Ali was the aggressor from the word go and would force Frazier’s corner to throw in the towel at the end of round fourteen.

And so boxing’s greatest trilogy, which spawned one of the best fights in history and single-handedly created the phenomena of trash talking, was complete.

Previous Post: « March Madness: Everything You Need to Know About Basketball’s Springtime Extravaganza
Next Post: Palpable Error: What are Your Rights When a Bookie Offers You the Wrong Odds? »