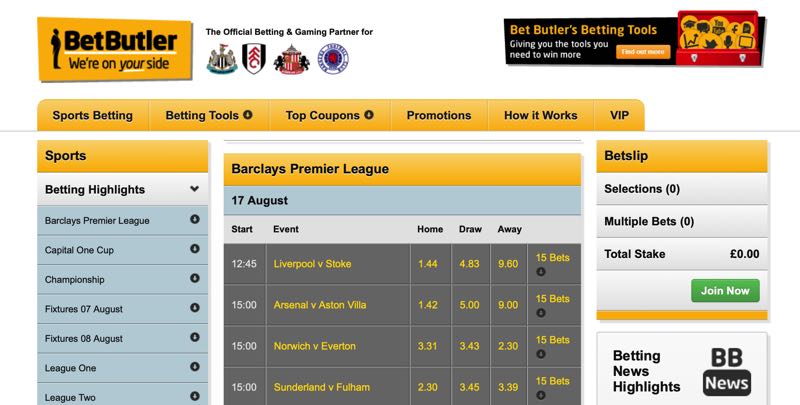 When Bet Butler first hit the internet in 2010, it aimed to revolutionise the industry by becoming something of a market comparison site for odds. It was certainly a novel idea at the time and one that caught the eye of more frequent bettors looking to maximise their returns. Despite being the only company to offer such a valuable-looking service, Bet Butler did not end up serving players for very long. After just a few years in the business, the butler hung up his white gloves after racking up significant debts. 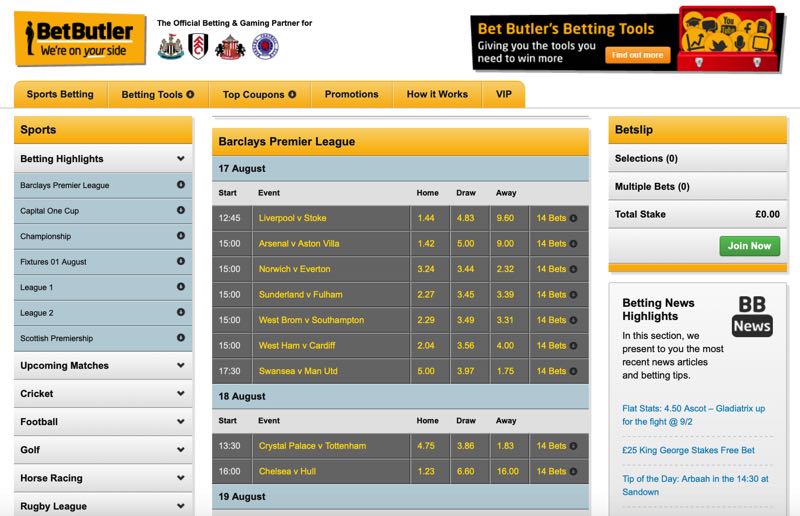 Bet Butler as a company was founded in 2007 but it wasn’t until 2010 that it eventually went online. The original website that launched was rather underdeveloped and only allowed bettors to place bets over the phone. Awareness was also limited with this a rather small scale operation that had not been heavily advertised. Moving into 2011 though and Bet Butler owners began to expand their operation and crucially, began allowing punters to bet online.

It wasn’t until 2012 when Bet Butler really made an impression on the gambling industry. They began increasing the visibility of the brand through a series of sponsorship deals including one that placed them as the ‘Official Betting and Gaming Provider of the Football League’. This high-profile position meant that many fans of football league clubs were suddenly exposed to the brand, having not heard of it before.

Between 2012 and 2013, club websites were advertising Bet Butler and informing their fans of the service they offered (including welcome offers). The company also penned an agreement with then Premier League outfit Newcastle United to become the club’s official betting partner. Such deals did come at a reasonable expense but it really helped connect Bet Butler to many prospective customers. 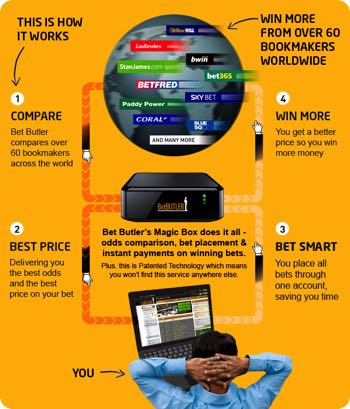 Research commissioned by Bet Butler found that punters’ unwillingness to shop around for the best odds was costing customers, collectively, £960m a year. This was happening because players were just placing bets at their favoured bookmaker, often because they had an easy to use website. The polling company Populus, who carried out the research on Bet Butler’s behalf, discovered that 42% of gamblers only ever used one account, even though this meant getting worse value.

At the time, there were over 60 different names operating online to choose from yet many people prioritised the convenience and speed of just heading to the same website they always used. A total of 74% of respondents said that ‘ease of use’ is an important reason when deciding on an online bookmaker compared to 65% that said good value odds. Even those punters who could be bothered to shop around more usually were limited to four or five accounts, rather than 10 or 20.

This is where Bet Butler spotted an opportunity because their concierge service could shop around for you. Punters therefore could place all their money in one account at Bet Butler but then have access to the odds from over 60 bookmakers. This would (in theory) ensure that every single bet they placed would be done so at the best market price. By using their service, Bet Butler estimated that on average winnings would be 12% higher. Given that the commission fee Bet Butler charged was only 3%, this still allowed punters to enjoy substantially larger returns.

If, without shopping around, a punter would win £30 from a bet, a 12% boost would mean winning £33.60. Minus the 3% commission of £1.01, this means an extra £2.59 in your back pocket, an actual increase of 8.63%. It was all hassle free too with Bet Butler’s patented technology doing all the work and paying out on winning bets virtually instantly. All you needed to do was to select your bets, your stake and confirm it.

As more players began to register at Bet Butler, improvements to the site were made making it a smooth experience from start to finish. It really did seem like a fantastic idea and one from which both Bet Butler and their customers could benefit. Cracks quickly began to show though and before long Bet Butler was no more.

In the summer of 2018, the English Football League announced it had terminated its two-year £2.6m sponsorship agreement with Bet Butler despite only being halfway through. The reason for this was that Bet Butler was unable to meet the terms of the contract. In other words, they were unable to pay at least one of the instalments. Not having sufficient money to pay for contractual obligations is always a major concern.

Despite seemingly having financial issues, this did not stop Bet Butler from purchasing failed social betting operator Bodugi’s player database in March 2014. Details of the deal were not published but by committing more funds, Bet Butler were taking a real risk and hoping things would pick up for them soon. Note that Bet Butler transferred player balances over to their site but only in the form of bet tokens rather than withdrawable cash. Usually in such deals, players would be free to take money out when the transfer is complete.

While some customers took confidence from this acquisition, certain shrewd punters noticed a crucial change in the Bet Butler terms and conditions just one month later. Previously the website had stated, “Any monies deposited with us are protected in the event of our insolvency by virtue of such monies being held by our bank in designated client accounts separately from our own accounts. Any monies deposited with us in your account shall not bear any interest.” However, this part was quietly removed, strongly suggesting that Bet Butler were now relying on customer funds to cover operational costs.

The novel website did manage to carry on for over a full year but in September 2014 the UK Gambling Commission revoke their licence. One of the reasons for this given was that the UKGC was “concerned about the licensee’s suitability to carry on the licensed activities.” There were three additional issues relating to the competency and financial status of Bet Butler and from this, there was no turning back.

The UKGC never overturned their decision for good reason as days later news broke that the company had amassed over £500,000 in debt. This marked an abrupt end to the Bet Butler adventure who suspiciously quickly had arranged a deal to sell their player database to a company named Momaco.

What Happened to Bet Butler Customers?

The virtually unknown Momaco paid just £1 for the Bet Butler client base, despite them not even having an approved UK gambling licence. At the time, this customer base included around 68,000 punters. The tiny fee for a database of this size was because Momaco agreed to pick up the player liabilities Bet Butler was responsible for. The plan was for Momaco, equipped with this player base, to launch an online betting website when they were issued a licence.

It did initially seem therefore that thanks to Momaco, Bet Butler players would eventually get their money back. The deal never materialised though, despite much early optimism, meaning Bet Butler customers never got a chance to recoup their money. Sadly, what later transpired, as we will later discuss, is that Bet Butler customers fell prey to two reckless businessmen.

Why Did Bet Butler Fail? 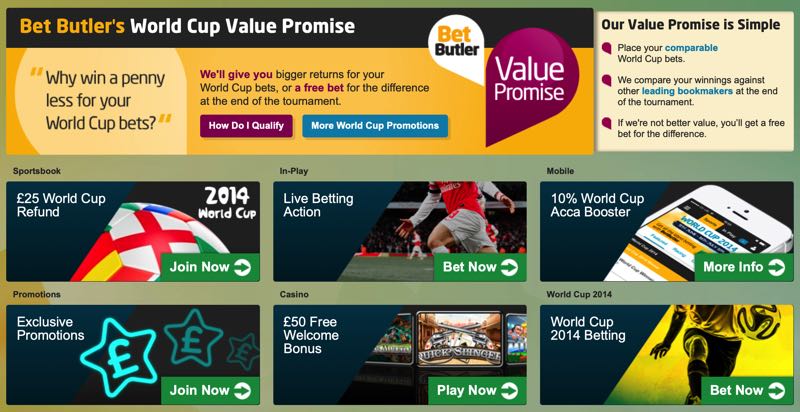 For those of you who were aware of Bet Butler’s existence at the time, you may be wondering why it failed. After all, it seemed a good concept and nobody else was providing the same service. The main problem was that the idea of Bet Butler did not work as well in reality as it suggested it would on paper. Poor levels of customer service and slow payouts was one common complaint of customers. Facing troubles in these areas is something many find very off-putting especially when dealing with large sums of money.

Another issue others noted was that Bet Butler did not always provide the best available price. With this being the main reason people came to their site, failing to provide much better value than their usual bookmaker of choice made it a far-from-worthwhile venture. Any horse racing fans also missed out on the best odds guarantee which they would have obtained if going direct with a bookmaker. This could easily mean they were actually worse off betting via Bet Butler.

On a similar note, punters also lacked other bookmaker perks when going through Bet Butler. For this think of extras like accumulator insurance, loyalty bonuses or casino free bets. By opting for the comparison site instead, customers ended up sacrificing many of these benefits for the sake of a slightly better price. Finally, Bet Butler failed to provide much in the way of extra value for accumulator bets as it was not possible for the system to allow them to secure the best price for each individual leg.

One of the men behind Bet Butler was Andrew Hosie and to help fund this business venture he advertised it as a safe investment. One of his many claims was that it was a “mathematical certainty” that investors would gain money. Overall, thanks to his false promises, he managed to raise in excess of £7m but virtually none of this was traceable due to poor accounting.

During his trial, it was revealed that Hoise repeatedly misinformed investors about several issues, showing them false account balances among other things. His intentionally misleading actions landed him a seven-year jail sentence for serious misconduct. He was also handed a period of disqualification which bars him from becoming involved in the promotion, formation or management of another company.

As for Bet Butler’s other owner, William Rollason, he was hardly a much better character in the eyes of many. Previously, he had been CEO of the parent company of Farepak, a business that operated as a Christmas savings club. This company collapsed in 2012 and took millions of pounds of savers’ cash with it. Even when it was clear the company was going to go bust, they still gladly took money from many of their 116,400 savers.

Rollason did seemingly avoid jail time for his actions but was severely reprimanded by the Financial Reporting Council and ordered to pay £65,000 in costs in 2013. The FRC ruled that Rollason acted recklessly and failed to act in accordance with the institute’s ethical code. Had more people known he was in charge of Bet Butler then they might have stayed well clear.