For football fans out there with decent memory, ‘The Blue Square Premier’ might ring a bell. This was the former sponsored name of the fifth tier of English football. For six years it was the betting company Blue Square that sponsored the National League but the arrangement ended soon after it was sold to betting exchange giants Betfair. By this point, the company was massively on the decline but they had enjoyed a largely successful history as an online betting website. 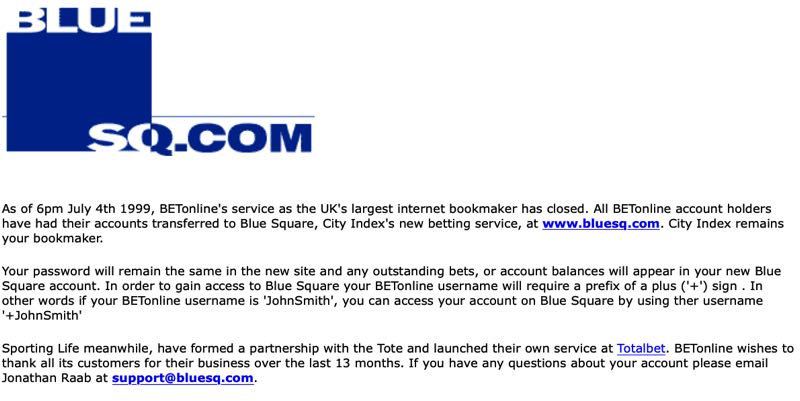 When looking at the origins of Blue Square (or BlueSQ) we need to go back to July 1998. This was the month that the Press Association and Mirror Group added a new section to their popular sportinglife.co.uk website. This new section was entitled BETonline and much like the name suggests, it allowed users to place bets on selected sports online. This was a real breakthrough in the industry as BETOnline became the first UK-based betting site. It did not take too long for others to follow suit but they were the ones that got the ball rolling.

BETonline grew too large just to have a room in the Sporting Life house so it moved out and acquired its own website, betonline.co.uk. The creators of the site then basically copied the same core content onto a rebranded sister website known as Blue Square. The two sites did not run side-by-side for very long though as Blue Square ended up absorbing BETonline in July 1999, presumably as it was viewed to be a more attractive brand.

Equipped with an Alderney Gambling Control Commission license and a UK Gambling Commission license, Blue Square used their early internet presence to good effect. Many people who were looking to gamble on the web turned to Blue Square and not just for UK customers either. The fact that the site supported multiple different currencies, which was very rare at the time, allowed Blue Square to draw in a wider base.

Seeing the potential in this fast-growing website, now one offering online casino gaming too, the Rank Group viewed it as a worthwhile investment. At the time the brand owned Grosvenor Casino and Mecca Bingo so they did know a thing or two about gambling. Having weighed up the pros and cons, they opted to proceed with a hefty £65m deal to purchase the Blue Square brand in 2003.

The Rank Group took a largely hands-off approach after purchasing the brand so there were no major changes that customers experienced. The new owners’ only interest was to reap the profit of this rather thriving online business and protecting its long term future. 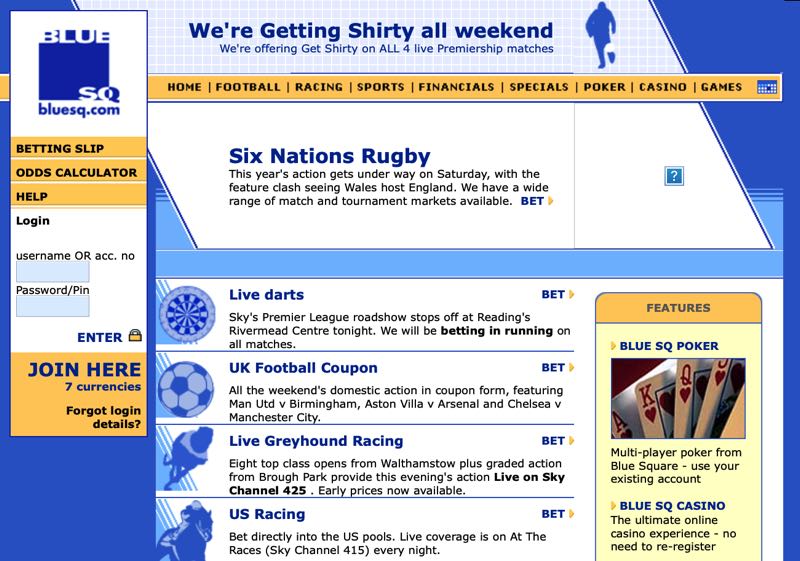 Blue Square might have been one of the first to offer betting via the internet but in the years after the Rank Group’s purchase, many competitors appeared. In order not to be brushed to one side, Blue Square’s new owners invested money into a series of sponsorship deals. First, they went ahead and became the official sponsors of greyhound racing’s most prestigious event, the Derby. A year later they became sponsors of the National League, covering the fifth and sixth tiers of English football. Initially, the sponsored name was simply Blue Square but this changed to Blue Square Bet in 2010.

Ensuring they covered a good range of sports, Blue Square also secured a deal to be the face of the Lingfield Winter Derby in 2010. As far as all-weather horse race meetings went at the time, this was one of the best of the lot. In the midst of all these new arrangements Blue Square also hired a new managing director, former lastminute.com and Travelocity boss, Mark Jones.

Upon announcing this quite high-profile appointment in 2008, shares in the Rank Group enjoyed a nice 1.5p boost (around 3%). At the time, Blue Square accounted for around 12% of Rank’s total operating profits but there was room to increase this with a better performance from their sportsbook. One analyst at Singer Capital Markets, quoted in the Guardian noted that Blue Square had been underperforming in this area against its rivals.

One more unusual effort Blue Square made to increase their brand recognition was to pay a gambler named Ashley Revell to change his middle name, by deed poll, to Blue Square. The reason Ashley Blue Square Revell was paid to do so was that he sold everything he owned and headed to Vegas to bet it all on one roulette spin. While Revell’s boldness did capture plenty of media attention (and was the inspiration for a mini-series called Double or Nothing) he seldom acknowledged the name change. The media followed suit too, rarely referencing the £20k investment, leaving Blue Square a little red-faced. 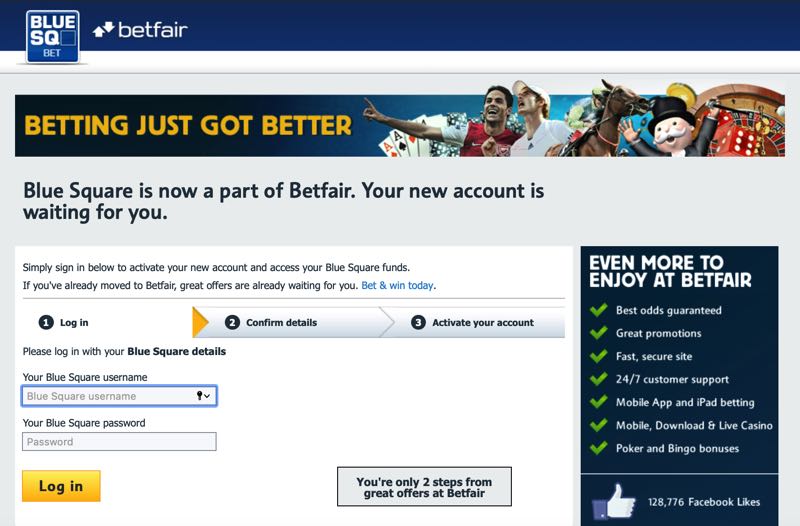 Although it was hoped that Mark Jones’ expertise in marketing would improve the fortunes of a brand being squeezed by its competitors, this did not prove to be the case. Seeing no real future for the brand, the Rank Group opted to sell “certain aspects” of the brand to Betfair for just £5m in 2013. Given that they had paid £65m for the full package a decade earlier, this was quite a loss to suffer. It was a hit the company was able to take though thanks to enjoying success in their casino and bingo ventures.

The ins and out of the deal with betting giants Betfair were not publicised but we know that it meant seeing the last of Blue Square. Very soon after the deal was wrapped up, Blue Square customers were informed that their accounts would be transferred over to Betfair. A real effort was made to make the move as painless as possible, with Blue Square players able to use their old login details at Betfair. For anyone not wanting to be a part of the new site, they were free to withdraw their cash from their new account.

At this point, Blue Square was officially dead and buried. Even had Betfair not swooped in when they did, it was hard to see much of a future for the struggling brand. The market simple became too competitive for them but nevertheless Blue Square bowed out as a well-respected brand that served many happy customers over a nearly 15-year period.