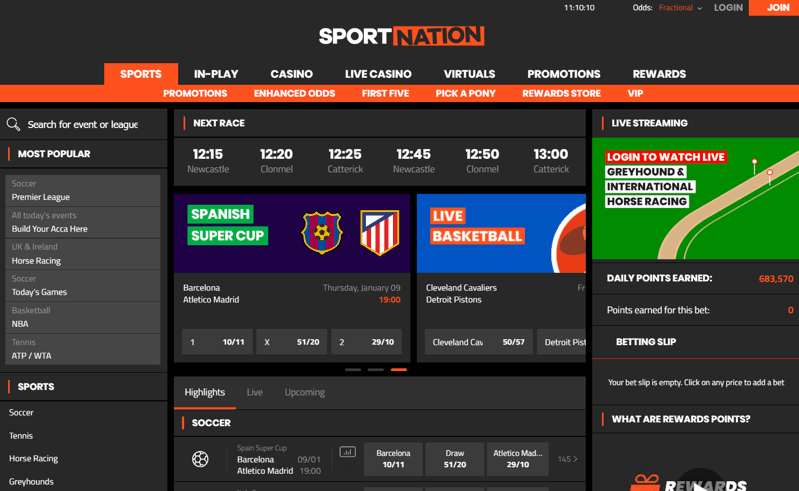 SportNation appeared on our radar in 2017 as a relaunch and rebrand of The Bet On Brazil sportsbook which was figure headed by Scottish ex-footballer and Talksport presenter Alan Brazil. The site actually flourished in the few years it had been about and whether that’s to do with Alan Brazil or not, the partnership was a successful one. They have kicked on again with a new look, new offers but the same great usability.

They have a substantial football betting offering and a great range of sports on offer. The site is one of the best that we’ve come across from the ‘new guard’ and whilst they possibly aren’t as big as some of the longer standing operators, they are making all the right noises to be right up there with them. 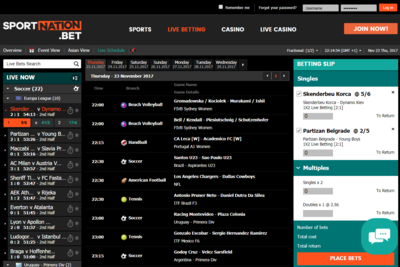 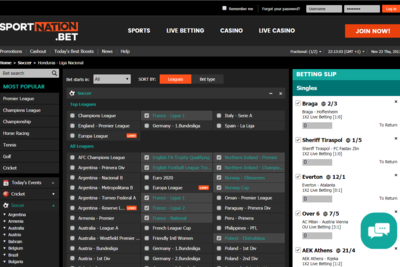 As soon as you land on the home page of the site it’s clear that the bookmaker has something about them. The first that we noticed has to be the design, which is fantastic. The grey, green and orange colour scheme sounds like a strange combination but it works very well.

There isn’t currently an app for Android or Apple mobiles, but that’s no doubt in the development stages as we speak. You can still access SportNation with a mobile device, the mobile site is simpler than the website but continues with the same design in a simpler format. We found that this was lightening quick to navigate around with a  betting slip that was easy to access and amend.

The market coverage on offer is really strong. Football has a massive following on site and you can tell within just minutes of being on it how prominent it is. Most top games are going to get around 100 markets to choose from, which is more than you will ever need really. We were pleased to see the inclusion of the likes of Asian handicaps and some specials to add a bit of variety.

Even though football is very popular, it’s not the be all and end all for SportNation by a long way. Horse racing has a great section to bet on as well, allowing you to select from colourful race cards. Also shown on the card are the horses’ age and weight along with the recent form and previous odds. Although a more in depth analysis would be good, this is still handy information to have.

The pricing structure has seen big improvements in recent months as well. Whilst they’ve never been terrible, when they first sprung on the scene it was highly noticeable that the majority of their odds weren’t up to scratch. They very quickly addressed this though and whilst they still aren’t the best out there, we cant really have any complaints about them.

The live betting section really is something that’s a huge improvement on the site’s previous incarnation. The main live overview is a hive of activity, giving you a great idea of what’s currently available. You can star the markets that you’re interested in to move them to the top of the page for easy access.

Live football games have a huge range of markets and each game’s match centre has graphics to broadcast what is happening there and then. All the previous key moments are indicated on a timeline and the important stats are shown underneath such as possession, shots and fouls.  Other sports such as tennis, basketball and even volleyball are similarly well represented, if with fewer betting markets.

Banking is an area that’s a real let down for us. The only options available are debit cards and bank transfers which is very disappointing considering the other methods that are out there. But, there are no fees to be had when depositing or withdrawing, with deposits starting from £10 and withdrawals also starting from just £10. Processing times vary but are usually around 3-5 working days.